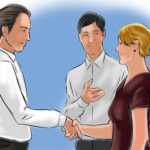 The other day, I was invited to give a seminar on interprofessional teamwork to a group of residents at a prestigious university medical center. . The group to whom I talked was made up of professors and residents in opthalmology. The first thing they did when they trooped into the room was introduce themselves to me. “Hello,” each said in turn, and then told me their name – professor or doctor so and so or just simply a first name. Since there were about 25 people in the room, no one really expected me to remember their names. But each and every one of them came up to me, shook my hand and told me there name. I, in turn, said hello to them and introduced myself — Hello, I said, I’m Suzanne Gordon – this in spite of the fact that they knew who I was since the seminar had been advertised to them in advance. What all of us were participating in was the creation of a ritual that did more than convey instrumental information about who we all were and what roles we played in the coming performance.

This act of introduction may seem totally banal. Introducing our selves to strangers is something we do everyday. Something we’ve been taught to do since we were children, when our mothers and fathers pushed us forward to greet a neighbor or friend or relative. “Say hello to Mr. Smith or Mrs. Rivera,” we were told, “tell them your name.” If we have mastered expected, polite, civil behavior, we have been introducing ourselves to people ever since. And we have also been acknowledging the presence of those to whom we have been introduced with some sort of nod, comment (i.e pleased to meet you, how are you? Etc). This kind of behavior is common not only when one is socializing, say going to a party or church super, or baseball game where one meets new people, but also in the workplace, where groups of people enter into contact with other people they don’t know and begin to work with them. Imagine, someone walking into your home – a plumber, a neighbor you haven’t yet met — and refusing to give their name and say hello. Or imagine a stranger walking into your kitchen, and telling you to give him a knife and the onions so he can start chopping. It is unimaginable.

Introductions, with a hello my name is, I am here to do, is commonplace everywhere. Everywhere, that is except in healthcare. Consider, for example, how these residents and attendings responded when I asked them what they did when they were called to consult and see a patient on a hospital ward. When they went up to the wards, I asked, did they introduce themselves to the nurses, unit clerk, or other people they would be in contact with – if only briefly. Some of the residents said yes of course always. And then the attendings and some of the others admitted that well, maybe not always, in fact maybe rarely, in fact, sometimes not at all. Which confirms what I see day in and day out in healthcare. People march into rooms, sometimes interrupting each other’s work and never introduce themselves or even acknowledge the presence of another person in the room or at the nurse’s station or bedside. As one of the attending physicians commented. “I usually go up to the wards and just try to find the patient and if the nurse is there I just introduce myself to the patient and do my work.” (introducing oneself to the patient everyone acknowledged was important and was something one should always, always do, although they did admit that sometimes they introduced themselves as their specialty as in “Hi, we’re hem/onc, or dermatology or cardiology. Is it a surprise that hospitals feel so impersonal?)

When we discussed the topic of introductions further, the physicians explained their behavior in some interesting ways. When we go up to the nurses’ station and try to get a nurses’ attention, they often fail to acknowledge our presence, they may not even look up, or we’ll ask about a patient and they’ll tell us they’re busy and besides they are not that patient’s nurse. (Which is absolutely accurate.  This problem is not a physician-only one).

Another physician commented that, as a consultant in ophthalmology, he may only visit a ward and see a particular set of nurses once a month, or year, or week, so why invest in the time it takes to make introductions when you don’t have an on-going relationship with the nurse, or respiratory therapist or PT – not to mention the housekeeper, unit clerk, or transport worker.

Nurses might say the exact same thing. Although they constantly complain that physicians don’t acknowledge their presence or even existence and never know their names, they also ignore doctors or are “too busy” to welcome them or help them out. In a teaching hospital, I have commonly heard nurses explain that there’s no point in introducing yourself to residents who come and go on a monthly if not hourly basis. And of course, they are way too busy to help out that newly graduated RN or student nurse or physical therapy resident.
We’re too busy, everyone agrees, it’s not worth it they concur. What’s the point? Indeed what is the point? Is there any? There sure is.

Introductions serve multiple purposes the very first of which is to make people feel that they are no longer strangers – no longer strange. Introductions convey critical information, like who you are, do you belong here, why are you here, what are you doing, are you legit, on the up and up. This is why the SBAR communication technique has become the ISBAR communication technique. I stands for introduction with full name, and title or function.  You replace the the voice on the phone saying, “Hi, this is Four South I need an order for morphine for…” with, “Hello this is Nurse Joan Smith who is taking care of Mrs. Jones who..SBAR “In this case the I situates you in relation to the other person on the line.

As I said before, introductions not only help us understand context, they also link people together. Imagine a football team on which people don’t know each other’s names. Oh that guy over there, the striker, yeah I’ve seen him before, day in and day out, don’t have a clue who he is though. Also unimaginable. When I do a workshop over several hours – even if there are forty people in the room – I always begin with a brief introduction asking people to give their full names and to tell me why they are at the workshop and what they hope to get out of it. Again, I can’t possibly remember all their names and reasons for attending. But by finding out who they are and what they want from me, I can situate myself and better fulfill common goals. Plus,they feel I am interested in them. We are now in relationship, no matter how shallow or tenuous. We can begin to work together. We might even have the makings of a team.  This is why people in business make such a fuss about introductions.  Because the first 3 seconds of an encounter establish the frame and thus make a huge difference.

Which is precisely why people who have never seen each other before and may never see each other again should introduce themselves to each other in the healthcare setting. What they are investing in is not necessarily that particular person – i.e. John Patel or Erica Newmark on 11 North (although may be they might decide that’s a pretty good idea). What they are investing in is the practice of institutional teamwork, the creation of an environment where people do not feel like anonymous cogs, invisible actors who are never respected much less rewarded – particularly by those higher up on the healthcare ladder. And let’s get another thing straight, the investment of time it takes to make introductions is minimal, even miniscule. Check you I phone, or watch, count how long it takes to say “Hello, I am Suzanne Gordon and I am taking care of…. Or am here to.” For those surgeons who think it takes too much time to make a quick introduction in the OR before beginning a case, I suggest doing the same thing. When I’ve timed it with six people, it takes exactly 19 seconds, ( or 26 seconds if the surgeon is slowing things down my gripeing about how long it’s taking).

So, if you’re a doctor, the next time you go up to someone you don’t know, introduce yourself to the nurse, unit clerk, respiratory therapist. If you’re a nurse look up and acknowledge the person standing in front of you. Maybe even try being welcoming as opposed to annoyed. Obviously, you don’t have to take introductions to crazy extremes. Every time you walk on to a unit you don’t have to go up to every single person you see and shake hands and introduce yourself. (I am not advocating a kind of Studer Group Stefford Wives introduction protocol here)  But if you are in connection with someone, no matter how briefly, then it’s time to do what we do in all other social and work situations. So how about an experiment. You don’t have to begin by doing it every time, but how about just introducing yourself once a day? Which may be one more time than is happening now. Then maybe all those one and only introductions will begin to add up to the tipping point of genuine team beginnings. If you do, let me know what happens.