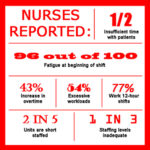 On May 28, Alexandra R0bbins wrote an Oped for the New York Times entitled “We Need More Nurses.”  Robbins has written a book exploring and promoting the work that nurses do entitled The Nurses: A Year of Secrets, Drama, and Miracles With the Heroes of the Hospital.  Her welcome plea for better/safer nurse staffing comes after a long line of researchers, journalists, and, of course, tens of thousands of nurses have begged local, regional, and national politicians to enact safe staffing laws.  As I have written in my book Safety in Numbers: Nurse-to-Patient Ratios and the Future of Healthcare, every single study of nurse staffing and patient safety documents the fact that more nurses equals safer patients.  That a nurse would be assigned to care for seven to nince patients or 20 who were deemed to have non-life-threatening conditions is — albeit astounding to some — not surprising to those of us who have followed this issue for decades.  Nurses have been begging for help for almost three decades now.  As a recent survey by the Massachusetts Nurses Association once again documents, nurses are terrified by  With the exception of nurses in California and the state of Victoria (and some others) in Australia, they have not won staffing ratios anywhere else in the US.  Could this be one of the reasons why the statistics on preventable patient deaths and injuries have barely budged since the Institute of Medicine Report To Err is Human was released in 1999.

Perhaps the saddest thing in Robbins oped and the most tragic phenomenon in this whole debate is the lack of physician, and physician organization support for safe nurse to patient ratios.  In her article, Robbins writes that, “According to the New York State Nurses Association, this month Jack D. Weiler Hospital of the Albert Einstein College of Medicine in New York threatened nurses with arrest, and even escorted seven nurses out of the building, because, during a breakfast to celebrate National Nurses Week, the nurses discussed staffing shortages.”  Although the hospital has argued that this is not correct, what is fact is how little  physician support nurses have received as they have struggled to enact practices and policies that protect both RNs and other nursing personnel their patients.  If physicians are captains of the healthcare ship, they should be doing everything they can to support and protect their passengers and crews.  Yet, too many hospitals have mobilized physician leaders to oppose staffing bills and other patient protection measures.  In an era when more and more hospitals, patient safety organizations, and educational institutions are talking about interprofessional education and practice and patient centered care — and  ostensibly initiating efforts to promote interprofessional collaboration–  everyone in healthcare has to begin to support their colleagues’ (and to consider people from other disciplines or professions to be colleagues) in their efforts to enhance patient safety.

Many physicians privately support nurses’ efforts to make their work and their patients safer.  It’s time for them to come out of the closet and fight openly for patient safety.  It’s also overtime for those who oppose measures like safe staffing to reconsider the Hippocratic Oath they once took to First Do No Harm.