Just had this posted on Beyond Chron.  Another great thing the VHA is doing in collaboration with other great organizations.

The Problem of Gun-Related Suicides 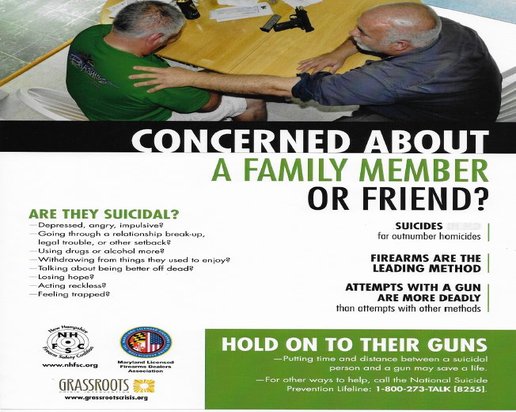 In America’s rancorous debate about gun control, the focus tends to be on homicides – particularly mass shootings. In reality, far more lives are lost every day through firearm-assisted suicide. There are nearly twice as many suicides by gun annually as there are murders involving guns. With these stats, and a particular at-risk population in mind, the San Francisco VA Healthcare System (VAHCS) and the American Foundation for Suicide Prevention’s Greater San Francisco Bay Area Chapter held a conference in San Francisco on March 4th aimed at reducing suicides among veterans by getting more of them to safely store their firearms and “other lethal means.”

Presenters and participants at the “Counseling Veterans at Risk for Suicide: Safe Storage of Firearms and Other Lethal Means” conference included former military personnel who have contemplated or even attempted suicide, the parents of a young soldier who succeeded, mental healthcare professionals, suicide prevention researchers, and three firearms dealers. All agreed that one way to reduce the number of veterans killing themselves (now estimated at 22 a day nationally) is to promote safe storage, an approach backed by public health researchers and mental health clinicians.

The March 4th conference was not just for the already convinced, however. It was designed to find common ground with those resistant (for political or emotional reasons) to any measures perceived as reducing rather than increasing personal safety and security.   As Russell Lemle, PhD, Psychology Director at the San Francisco VA Health Care System and one of the conference organizers acknowledged, “If we are going to forge effective approaches in the broader veteran community, we need the voices of gun advocates, veterans, and their families.”

In her introductory speech, Christine Moutier, MD, Chief Medical Officer for the American Foundation for Suicide Prevention explained that suicides are now the tenth leading cause of death in the US, with firearms the means of choice in half of successful attempts. Psychologists Caitlin Thompson, the national leader in suicide prevention for the Veterans Health Administration, and Megan McCarthy, the Lethal Means Safety Coordinator at the SFVHCS explained that while the suicide rate for older veterans is the same as their counterparts in the general population, the rate for younger veterans from the wars in Iraq and Afghanistan is higher. Seventy percent of all the veterans who succeed in taking their own lives do so with firearms.

Jean and Howard Somers, mother and father of one of these veterans told the story of their son, Daniel Somers, a Sergeant in the California Army National Guard. In 2013, after years of coping with the aftermath of numerous traumatic brain injuries and Post Traumatic Stress Disorder (PTSD) acquired during multiple combat missions in Iraq, he wrote his parents and wife that he was he was, “Too trapped in a war to be at peace, too damaged to be at war…. My body has become nothing but a cage, a source of pain and constant problems.” He took his firearm and ended his life.

Jason Zimmerman – a former Army medic, who has PTSD and is now a Peer Specialist at the James H. Quillen VA Medical Center in Mountain Home, Tennessee, explored one of the central dilemmas the conference addressed. For many veterans, gun ownership is part of their culture.  “In the military service,” Zimmerman also explained, “ we learned that our weapons are our friends.”

Once out of the service, Zimmerman continued, veterans may, be reluctant to go into counseling or report a mental health problem or suicidal thoughts because they erroneously believe their weapons will be taken away from them. They and their families will then be unprotected from threatening strangers, which many report to be the primary reason they own firearms.

To reduce the threat of suicide in a population committed to gun ownership is therefore a challenge. One that can be addressed, conference participants argued, by promoting the safe storage of weapons. Catherine Barber, Director of the Means Matter project, at the Harvard School of Public Health’s Injury Control Research Center, explained that many members of the public believe that people who try to kill themselves will find a way or to succeed. Scientific evidence, she explained, dispels this myth: Suicide is usually an impulsive act and only 10% of those who attempt to kill themselves will go on to later die by suicide.

Over and over again, Barber outlined the facts; reducing access to the most lethal means reduces the overall suicide rate. In Sri Lanka, for example, banning the pesticides that were most toxic to humans (the method of choice for a rural population) reduced the overall suicide rate in that country by 50%. In England and Wales, when non-toxic gas replaced toxic gas in ovens, suicide rates dropped by 30%. In 2006, when the Israel Defense Forces (IDF) required service members to store their weapons on base when they went on weekend leave, the suicide rate dropped by 40%.

For good reason then, suicide prevention advocates and researchers want veterans in crisis to leave their guns with friends, or store them at shooting ranges, or in safes in their own homes.   To encourage veterans to do this, of course, involves asking them the right questions, in the right way, and at the right time. To make sure this happens, the VHA has funded Megan McCarthy, PhD and her colleagues at the SFVAHCS – in collaboration with the Harvard School of Public Health Means Matter project — to develop a pilot project to train mental health providers in Lethal Means Safety Counseling. Even seasoned mental health professionals, McCarthy told the audience, need to understand that directly telling a veteran he or she shouldn’t have access to a firearm during a crisis will not work as well as guiding the veteran to think about how to keep himself safe when things look unremittingly bleak.  The training has been piloted in San Francisco as well as at the VHA in Northern California and four VHA facilities in Pennsylvania, and will be disseminated in other VHAs this year.

As is typical with public -private partnerships in the VHA, all the information, research, treatments, and trainings the VHA develops, are available to private sector researchers and practitioners. Which is why researchers like Catherine Barber and Christine Mouthier, among others, told me they were so impressed with the VHA. “I don’t understand the image the media is painting of the VHA,” Barber told me candidly. “It bears no relationship to what I see happening and what I experience when working with VHA providers and researchers.”

It’s a shame that so few members of the media who had been invited attended the conference. The mainstream media seems only interested in reporting negative stories about the largest, and only integrated, publicly funded health care system in the US. As a result, there have been few media reports on the many research studies documenting the high quality of VHA care for those who have access to it. For example, a recent national study of suicides that occurred between 2000 and 2010, documented that veterans who used VHA services had reduced rates of suicides, while veterans not utilizing the VHA had increased rates. Moreover, veterans who seek mental health treatment at the VHA receive care that is far superior to the services offered in the private sector. Veterans who don’t know the facts, however, may not seek treatment from the one healthcare system that – when properly funded by Congress– is best equipped to help them.

Healthcare journalist Suzanne Gordon has authored 18 books, many on the problems of patient safety in the private sector healthcare system.  She is writing a new book on VHA healthcare and has spent the past year and a half visiting VHA facilities around the country.