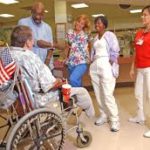 I just had this published in the American Prospect.

The Commission on Care—a congressionally mandated federal body tasked with evaluating alleged shortcomings at the Veterans Health Administration (VHA)—is deliberating largely behind closed doors and, according to sources close to the deliberations, may have a heavy bias towards privatization. This is ironic because one of the critiques against the VHA has been its purported lack of transparency. The commission’s pro-privatization tilt also worries veterans health advocates who point to research documenting that private health-care providers are not performing as well as the VHA on many measures critical to veterans.

Although some portions of the Commission’s meetings are open to the public, most of its internal deliberations are closed. The commission holds all of its meetings in Washington, D.C., making it impossible for veterans who don’t have the money to fly to the capital to be heard and to observe. Of course, veterans may send in comments to the Commission, but it’s impossible to know how much influence those will have.  This in spite of the fact that the VHA is the largest health-care system in the United States, serving eight million veterans—intensifying public interest in the commission’s deliberations.

The commission did release an interim report, as required by the 2014 law that mandated its creation. The Veterans Access, Choice and Accountability Act, passed in the wake of public concern over alleged treatment delays at VA hospitals around the country, charged the commission with examining how the VA should best locate, organize, and deliver its veterans health-care services.

Yet that report identified certain practices that are built in to any government program, such as the federal personnel system, as detrimental to the VA. Among other findings, the Interim Report concluded that one of the primary challenges facing the VHA is meeting the “standards governing health care in the private sector,” a critique with a distinctly conservative ring.

The commission’s explicit charge is “to examine strategically how best to organize the Veterans Health Administration (VHA), locate health resources, and deliver health care to veterans during the next 20 years.” Some veterans’ health-care advocates who have attended the commission’s open sessions say they see signs that influential commission members are pushing for privatization of at least some VHA services. “There seems to a consensus among most of the commission members that some privatization should occur with some members recommending total privatization. It’s clear that a number of the members of the commission—particularly those who come from private sector health-care institutions—have little experience with or knowledge of the unique problems of veterans,” commented one veterans’ health advocate who has attended most of the open sessions and has talked with commission members and staff.

“The mind set seems to be that the Commission should ‘split the difference’ between those who are determined to hand over services to private sector providers and those who believe veterans are best served if the VA is strengthened and continues to deliver comprehensive services,” said another veterans’ advocate who also asked not to be identified. “Splitting the difference would compromise a high-quality integrated health-care model without saving any money.”

The subtext of the commission’s interim report and of its open meetings appears to be that the VHA is fundamentally broken, and that private sector health-care is both superior to VHA care and can handle an influx of veterans with complex medical and psychological problems. Yet a 2014 Rand study of veterans’ mental health care explicitly tackled the question of whether the private sector healthcare system was “ready to serve” the needs of veterans. The answer was no.

The commission’s final recommendations are not due until later this year. The big question now is whether the commission will base its recommendations on empirical research, such as the findings of the Rand study, or on the talking points of the VA’s conservative critics on Capitol Hill.

And check out Suzanne Gordon’s in-depth take on the Veterans Health Administration’s strong performance in the face of right-wing attacks from our Fall 2015 issue.