Is the Goal to Be Nice or to Be Safe? 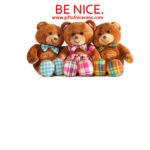 Several weeks ago, I was talking to a colleague who is a hospitalist at a community hospital. She was picking my brain about teamwork, wondering what kind of in-service she could provide to help physicians, nurses and others in her hospital  better communicate.  The woman is very well-intentioned and really wants things to improve.  But she is stymied by several fundamental problems.  One is the way the whole issue of team communication is often framed.

When this physician called me about her desire to re-form communication between doctors and nurses, she framed her concerns in terms of niceness.  We, as physicians, need to be nicer to nurses.   This is a common formulation of the problem.  Nurses will often say that nurses need to be nicer to each other.  Or they believe that nurses need to be nicer to aides, and so on.  And everyone should be nicer to the housekeeper or janitor or electrician.  I have nothing against niceness or being nice.  The problem is that the issue here isn’t niceness.  It’s all about Team Intelligence which is all about patient and staff safety.  Physicians (or nurses or whomever) need to open to and solicit the input of those with whom they work not because it’s nice to do so but because patients’ lives depend on the doctor learning from the nurse, the nurse learning from the aide, and everyone listening to anyone who has critical information regarding the patient and their care and environment.  This learning involves more than the nurse reeling off a series vitals, or the housekeeper reporting that he or she cleaned a room.  It involves helping people feel psychologically safe so they can report critical problems or concerns– like RN to MD, “Dr. you might be giving the wrong dose of the wrong drug to the wrong patient.”  Or housekeeper to chief of infection control, “You know I noticed there are certain parts of the patient’s room we do not usually clean.  Could this be why we have so much trouble with MRSA?”  (This is exactly what happened when the Veterans Health Administration launched its successful effort to reduce MRSA in its 152 hospitals.  Physicians encouraged housekeepers to speak up about their concerns and they identified critical problems that they then helped to resolve.)

The effort to enhance, improve, or simply create communication in hospitals must be liberated from the rubric of niceness and planted firmly under the category of patient safety or it will never produce patient safety and high reliability healthcare.  At the VA hospital at Fort Miley in San Francisco, for example, rounds on the ACE Unit (Acute Care of the Elderly) have been carefully constructed so that the input of the entire team is elicited and welcomed.  When I have observed attending physicians like Kathryn Eubank during rounds, I was impressed by the warm welcome they gave RNs who entered the circle (which quickly expanded to include them) and how they similarly welcomed RN input about the plan of care for a particular patient.  Every time an RN walked in to the patient’s room to participate in morning rounds, an attending physician thanked her or him for coming and every time the RN made a comment or expressed a concern about patient care, the attending physician thanked the RN for the comment.  I knew that the intent of  this welcoming attitude had nothing to do with being nice.  When I questioned Eubank, she made that quite clear.  She explained that it is critical for physicians to solicit input from RNs if patients are to be safe and care to be of the highest quality.  The only way to get busy nurses to take the time to participate fully and enthusiastically in the rounds, she said, is to make them “high yield” for the nurses.  So before launching these rounds, a year’s worth of work was done with nursing to make sure this is precisely what would happen.  The goal here was not to be nice to the nurses or anyone else but to deliver safe, high quality care.  And just as a parenthesis, during these rounds residents presenting the patient’s case, in front of the patient,  are encouraged to refer to the patient as “you” ( as in “you have been complaining about chest pain or shortness of breath”) not as “Mr. Smith” or “the patient”– as though the patient were not in the room, and was a spectator at — rather than participant in — the discussion of his/her experience and care.  All of which goes to show that the goal here is patient centered care.  But of course, the patient can’t be the center of anything if the team doesn’t learn how to communicate both with the patient and amongst its own members.  And all of that takes training — which means time and effort.  Tune in to the next post about that.