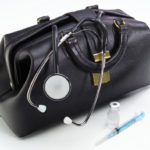 When I was a kid, the doctor came to you when you were sick. The idea of taking a sick child to a physician’s office was unheard of. It was considered semi-barbaric to force someone who was sick to leave the comfort of home and trek to a doctor. Plus, you were endangering other people by bringing a sick patient into a waiting room where they could infect others. In America, with some notable exceptions, the house call is a thing of the past, even for children.

In many European countries the idea that sick people should not leave home in order to go to a doctor is as commonly accepted today as it was in the US in the 1950s.. In France, for example, house calls are routine.   In the office of every French general practitioner (known here as primary care doctor) is a list of fees (as determined by the French healthcare system). There is a fee listed for a routine office visit and a fee listed for a home visit. In my 45- year history with the France and the French healthcare system, both I and my children, have benefited from this long standing practice. When I once had a terrible bronchitis while visiting Paris, I never left the house of my friend – not to be diagnosed or treated. The doctor came to me. The home care nurse came twice a day to give me shots of antibiotics and the doctor came again to make sure I was recovering appropriately. In the US, I might have been hospitalized, at God knows what cost, In France, there was no question of hospitalization. I was cared for by a well- developed home care services and my care was fully paid for by the French healthcare system (one of the best in the world).  The system paid for all of my treatment even thought I was a foreigner. When my eldest daughter developed a bad case of diarrhea during a summer visit to a rural French village, a GP came to her camp to make sure she was still well hydrated. The goal was to keep her out of the hospital (particularly in August, when half the medical and nursing staff was on vacation), which the French recognize would be far more costly.

A Japanese friend of mine  lives in Japan where she cares for a severely disabled husband. She receives weekly visits from healthcare personnel. The idea that she would have to struggle to get her husband to a doctor’s office would be unthinkable. These visits are totally cost effective. They have kept her husband both out of the hospital and more costly a more costly nursing home.

Home visits work in many other countries – countries which have generous home care benefits and much, much lower healthcare costs than our own. They can also work here as one part of a broader solution to give patients appropriate care while cutting health care costs.  The cost and care effectiveness of house calls has been proven over and over again by a small number of primary care physicians who are still making them in the US.

I am lucky to be a patient of one of them who practices in the Bay Area. My PCP Jane Himmelvo loves making house calls. She told me she once participated in a grant and practice where she did only house calls.  Her patients had less hospitalizations and were much better off than those who did not get such visits.  When Jane was moving offices from one East Bay town to another, her entire practice consisted of home visits. Being on the receiving end of one of her house calls was revelatory. My husband, also her patient, was having ringing in his ears. So Jane came over to our house. She arrived on time with a nurse, her medical bag and her chart. (If she had been late, she would have called to let us know and we wouldn’t have minded much, since we had plenty to occupy us in our own home. )

When Jane arrived, the dynamic was fascinating to observe. Although she was in our home, this was most definitely not a social call. There was no question that we would sit around drinking tea or coffee and chatting. Jane was here for an instrumental reason. Nonetheless, the dynamic of power had definitely shifted.  The fact that our physician was definitely on our turf, we were not on her’s mattered a lot. So did the fact that she had no other patients in her waiting room. Although she had other patients to see that day, we did not feel the same kind of pressure we would have felt in an office visit.  Nor was she bothered by the physician/PCP’s newest companion – the computer and its electronic medical record (EMR). Jane always pays attention to her patients not her computer, but the fact that there was no computer presence anywhere was even more noticeable in our home. This allowed us a very different sense of control and it allowed her to see what kind of environment her patient lived in.

Jane made her recommendation – see an ear doctor for testing and left. We were delighted with the visit and would do it again anytime. No one rang us to quiz us on our patient satisfaction score, but believe me it was very high. House calls not only enhance patient satisfaction, they also lower health care costs by preventing unnecessary hospitalizations and keeping people out of nursing homes.

In my next blog post, I want to talk about a shining beacon in healthcare, particularly when it comes to house calls – that’s the Veteran’s Health Administration – which has one of the most well developed house call programs in the nation.