The Pope and Women 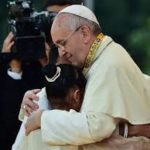 Although I have written about Pope Francis’ extraordinary Xmas speech to the Roman Catholic Curia, I don’t usually write about the Catholic Church.  Although I am married to a lapsed Catholic, and was raised by a devoutly Catholic Nanny, who taught me to say the Rosary before I could say my Jewish prayers, I am not a Catholic.  But the new Pope has instilled hope in many of us who are seeking to reform institutions — like the Catholic Church or in my case of  healthcare.  I can’t help responding, however, to today’s article in the New York Times titled “Women See Themselves as Left Out Amid Talk of Change in the Catholic Church.”  This article appears the day after I finished reading an excellent  biography of Pope Francis The Great Reformer by Austen Ivereigh.

The book is a fascinating look at the Pope’s humble beginnings, his stint as an Argentine Jesuit, his actions during Argentina’s Dirty War and his subsequent role as Cardinal and finally as Pope.  What is so remarkable about the book is the almost entire absence of women in Jorge Bergoglio’s life and thus in his biography.  Of course he had a mother and grandmother, and aunts and sisters.  And yes, there is the odd mention of women — the nuns who served him dinner, or adjusted the former Cardinal’s vestaments to fit Padre Bergoglio when he become Cardinal in 2001–a few who died during the political upheavals in Latin America in the latter part of the 20th century, the representatives of the mothers of Argentina’s desaparecidos (disappeared).  But not a single one of the people who influenced Padre Bergoglio’s/ Francis’ theology, politics, or philosophy is female.  As he advanced in the church hierarchy, of course, women recede almost totally from the story.  And things don’t get better when he becomes Pope.  Indeed, the author of the biography tells us he excommunicated a priest – Father  Greg Reynolds of Melbourne, Australia –who supported the ordination of women and the New York Times informs us that the Pope is “strikingly tone-deaf about the sensitivities and needs of women.”  Upon appointing five women to a church committee he described them as the “strawberries on the cake.”

In the same issue of the New York Times that reported on the Pope’s relationship to women’s issues, another relevant article appeared.  It reported that the German parliament just voted to set quotas on gender for the boards of large German corporations.  Thirty percent of corporate boards in Germany must now be made up of women.  Because of the fact that so many large multinational corporations are based in Germany, this move promises to have a huge impact on the composition of not only of the boards of German corporations, but of many worldwide.  It would be great if this move also had an impact on one of the largest corporate entities based in Europe — that is The Vatican.  Maybe the Pope will be moved by today’s headlines and begin to add the plight of women in the Catholic Church to his list of reforms.  Even ceasing to describe women as “strawberries on the cake’ would help.