Patient Safety and the "Deaf Effect"

It is now well recognized that the majority of avoidable patient deaths and injuries could be prevented by better teamwork and communication.  What does this mean in practice?  It means that in many instances, someone knew that patient harm was imminent but that someone didn’t speak up – or didn’t speak up with enough urgency – to stop harm from happening.  In many instances that someone – as I have written elsewhere in this blog – was lower down on the healthcare ladder and was afraid or unable to alert someone higher up on the ladder that an error was about to occur.  Sometimes, harm happens because someone lower down the power gradient knew something bad was about to happen and did, in fact, try to alert higher ups but no one listened.  Harm occurred not only because no one acted on warnings in a particular case.  Even greater harm was done because lower level staff now feel so frustrated and demoralized that they are convinced there is no point in taking future action to prevent patient harm.  People who may have taken huge risks to alert higher ups to problems are now absolutely certain there is no point in taking any risk in the future.

A recent article in Quality and Safety BMJ entitled “Deafening Silence? Time To Reconsider Whether Organisations Are Silent or Deaf When Things Go Wrong,” explores how silence begins and becomes a cultural habit because organizational higher-ups do not heed the warnings of so-called “whistle-blowers” who bring attention to critical problems within an institution.  Authors Aled Jones and Daniel Kelly argue that when it comes to preventing harm, the focus is generally on why people don’t speak up or blow the whistle on harmful practices.  The prevailing notion is that people are  too often silent and so our energy must be spent on getting them to raise their voices to protect patients from harm.

Looking at several recent scandals in the National Health Service in Great Britain —  problems at the Mid Staffordshire National Health Service for example – the authors report that the conventional wisdom was that people did not speak up to prevent harm.  In fact, numerous reports document that the contrary was the case:  many people tried to bring attention to poor quality and practice but that no one listened.  A nurse tried to raise her concerns.  Rather than be supported by her nursing colleagues, she was told to “watch her back.”  A junior doctor raised concerns to management and a post-graduate Dean and no one took action.  “Inquiry counsel Tom Baker described the repeated raising and subsequent disregard of concerns in Mid Staffordshire as ‘a cry from staff who appear to be being ignored’.

The authors go on to consider the notion of “organisational silence ”  or “cultures of silence.”  They argue that a more accurate definition of what goes on in many healthcare institutions that ignore employees or staff attempts to raise critical concerns is not silence but rather organizational deafness or what they call “the deaf effect.”  As they put it, “The term ‘Deaf Effect’ has its roots in management and information studies literature, being defined as occurring ‘When a decision maker doesn’t hear, ignores or overrules a report of bad news to continue a failing course of action’  When organizational deafness is the prevailing mode of response to concerns, then the authors go on to argue, silence does become the dominant mode of response because voice is viewed as futile and silence viewed as the only option.  Deafness leads to silence and silence becomes, as they put it, contagious.  “If employees are ignored when one concern is raised, this can lead to silence about a range of other concerns.”

The question thus becomes how does one fight deafness and the deaf effect and encourage voice.  In order to do this, organizations must encourage voice and thank people, reward people, and encourage people who deliver not only good news but bad.  In the UK, the government is beginning to do this by recognizing whistleblowers on the Prime Minister’s New Year’s Honours List.  In the US, managers need to do the same.  I would suggest getting rid of any and all signs in managers office alerting staff that this is a “whining free zone.”  I would also hand out cards like this one that I made up (I stole the idea from a natural food store in Portland, Oregon.)  It’s the Don’t Shoot the Messenger Card. 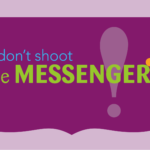 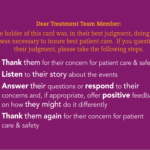 In another post, I will consider the issue of organizational silence because I think it is one that must also be considered.  But for now, everyone in the patient safety movement should be reading this new article and putting into practice what we should all be preaching.