The Tango Lesson and Patient Safety 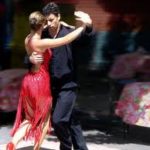 Last night I took a tango lesson with my daughter.  This is the third ballroom dancing experience I’ve had in several months and it has convinced me that social dancing can teach us a lot about team leadership and followership/membership that, surprisingly, can be applied to patient safety and interprofessional education and practice.

Before last night, I had never taken a tango lesson in my life.  But about 30 people in the room – some excellent, some novices – listened to instructions about how to lead and follow and dance a rudimentary tango.  The trick here is that leadership and followership are intimately connected and that the leader has to know how to lead and follow in order to lead and the follower has to know how to follow and have some experience leading in order to follow.  To teach ballroom dancing, instructors have moved way behind the man leads, woman follows and never the two will interchange roles that I learned when I took “social dancing” in middle school from Mr. and Mrs. Barry over 50 years ago.  In those days roles were rigid – the man led, the woman followed – and there was absolutely no mixing and matching.

Today all that has changed.  As it should in healthcare.  When they teach ballroom dancing today, you are asked to practice being a leader and a follower.  Your partner is introduced to you and you know what role you are going to play and learn the rudiments of playing it.  Whoever is ultimately going to be the leader will lead, but that person has to have some experience dancing backward and being helped to play their role in order to be a good leader.  Similarly, the person who will ultimately play the role of follower, has to understand what the job of the leader entails in order to follow well.  So in our dancing class men played leaders and followers and so did women.  In our new world, women danced together and women and men danced together. (what had not changed was that no men danced together).

The follower also has a lot to think about.  Ginger Rogers said it best. When commenting on the fact that Fred Astaire got all the credit for the orchestration of their dancing, she said, “Sure he was great, but don’t forget Ginger Rogers did everything he did backwards…and in high heels!”

The follower has to pay attention, get the signals and then add their talent to the mix.  In tango particularly, followers have a lot of leeway in how they move with their partner.  All those kicks and swirling legs that make tango so special are up to the follower to add to the mix.

What was also amazing about our tango lesson,  was that in tango, people who get good practice a lot, not only with the person they came with to the lesson, but with new partners they meet on the floor.  A good tango dancer can perform with folks he or she has practiced with a lot.  But that practice doesn’t only make perfect with one team.  Learning to lead and follow with one partner makes it possible for you to change partners and perform well even though you have never danced with that partner before.  So at our tango lesson, people were constantly shifting around the room, dancing with new partners.

What was even more amazing, was that someone who was an excellent tango dancer would dance with someone who was a total beginner,  like me or my daughter and rather than reproach us for our beginner’s lack of knowledge and inevitable flubs, they would coach us on how to be better.  “Turn here, glide more, that’s great, now try this.. “ was the advice.  The whole setting encouraged psychological safety rather than embarrassment and humiliation.  I was terrified of being asked to dance by anyone other than my daughter.  But the environment was so safe that I could actually learn from experts not fear them.

What is so important about this lesson in leadership and followership is that to dance well together, people have to understand, value, and sometimes even experience each other’s roles.  They have to coach not reproach (as in an attending humiliating a resident when the resident can’t answer a question, or a veteran nurse or nurse manager wondering what those new grads “can’t hit the floor running.”

This is my third lesson in social dancing this year.  My second was a lesson in salsa dancing with my son-in-law from an excellent teacher who similarly encouraged us to play leader and follower and who taught us how to play both roles and to be in tune with one another as a team.  And then I had the last experience with social dancing that I want to write about.  That one  stood in stark contrast with the other two.  I had gone down to a local bar to listen to a great jazz pianist play the tunes I love.  Cole Porter, Gershwin, Bossa Nova, Jobim.  I stood up to sway to the music and a gentleman asked me to dance.  He was actually a very good dancer, much better than I am. I thought, wow, I could really learn something and improve here.  Problem was, he was so into coming on to me that all I wanted to do was stiff- arm him and keep him as far away as possible given the fact that I was now caught in his arms.  He would tell me the moves to make, but the sexual innuendo was so heavy, all I wanted to do was run.  I could not concentrate on learning, all I could do was think about escape.  He had the talent.  He had the experience. By tradition, as a man, he was assigned the leader role.  But he was so self-preoccupied and aggressive that he could not lead and so I could not follow.

There is a lesson here for medicine and patient safety.  Leading a team takes work, practice, and an awareness of  the need to create a safe environment in which people can learn and practice.  It is not about strutting one’s stuff, about putting people in a one under position, or barking commands.  It is a subtle practice, full of both nuance and clarity.  So is followership.  No one in the US seems to want to be a follower.  Everyone is obsessed with leading.  But as Ginger Rogers put it so eloquently, it’s as tough to follow as to lead.  In the OR, or on the hospital floors you may not be in high heels, and hopefully you aren’t moving backwards, but everyone is doing tricky, complicated work in a high stress environment.  There is no mindless work going on in healthcare, just minds working differently doing their different leading and following jobs.

I have a thought.  Maybe we should jettison all the various exercises we give people to help them work in teams – building Lego structures together, assembling paper airplanes – and take people who want to learn to lead and follow and give them a tango lesson or two (or even fox trot, jitterbug, or chacha).  That might help them understand the complexities of teamwork.  Finally!!!