A Doctor Goes into the Cockpit and Sees Some Interesting Things 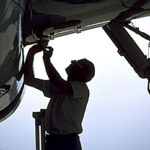 Several weeks ago, a physician friend told me a “surprising”  story—as he put it — that illustrates what can happen when Team Intelligence training is part of workplace socialization – particularly in high risk industries.   My friend, Michael Gardam – who is a patient safety expert and head of infection control at the University Health Network in Toronto, was taking a flight from Vancouver back to Toronto.  He boarded the plane, went to take his seat and discovered that there was – literally –no seat to take.  Someone had spilled coke on the cushion and it was in the process of being replaced. Since the flight was full, Michael was asked to go to the cockpit and sit in the jump seat with the captain and first officer until his seat was available.

As the captain and first officer (FO) were doing their pre-flight checklists, a mechanic walked in.  Turns out there was a problem with a tire with a worn tread and the three needed to figure out what to do.  The primary question was:  was the tire a safety hazard that needed to be dealt with immediately – by replacing it before take off.   Or could it make it until the plane reached its destination and be replaced in Toronto.  The secondary question was: who would decide what to do and how would that decision be made.  The answer to that question seemed, as Michael recounted, pretty simple.  After the mechanic and Captain discussed the technical details the captain asked the mechanic, “well, what do you think we should do about it.  You’re the expert on this, so tell me what we should do.”  The mechanic told the captain that the tire did not need to be changed, the captain agreed and the flight proceeded and landed safely. Michael has been trying to teach people the value of these kind of exchanges to patient care and safety for years.  He was surprised – and delighted — by this aviation exchange because it is so rare in healthcare. As Michael and I talked about the exchange, I was struck by how complex what should be a simple routine actually is.  The captain’s response involved three separate but interconnected conceptual/behavioral acts that would almost never occur in most healthcare settings, which are characterized by a preoccupation with deference to authority, too often at the expense of safety.  The kind of exchange Michael observed – which is now routine in aviation – is the precise opposite of the deference to authority, physician as priest, captain as king model that used to be the norm in aviation and still is in healthcare. Consider the elements of the story.  What was the first thing the captain – team leader – did?   He talked over the problem with a subordinate, someone who, as Michael accurately described it, was many rungs down the ladder. He explicitly solicited the input of this “subordinate.”   Then the Captain did the second surprising thing.   He didn’t just ask for input, he explicitly told the mechanic that he, the mechanic,  was the expert when it came to wear and tear on tires and happily acknowledged that he, the captain, the ultimate formal authority, actually didn’t know much about the issue at hand.  Then – third surprising thing – he told the mechanic that he should make the final decision.  Then came the fourth thing: he, the captain of the ship would do whatever the mechanic advised.  In other words, the captain – at least when it came to this particular decision — was not, in the unforgettable words of former President George W. Bush, “the decider.”  The “subordinate” was. In many settings, this exchange would be unthinkable, indeed almost revolutionary.  As Michael told me, “ can you imagine a surgeon asking a medical device reprocessing technician or housekeeper, or even nurse, for input and tell her that she was the expert?” Forty years ago, the exchange my friend and colleague observed would also have been unthinkable in aviation.  But over the past 40 years, aviation has embraced a Team Intelligence training and safety model called Crew Resource Management.  According to this model expertise is formally socially distributed.  It does not reside only in one person, the socially/organizationally sanctioned leader who is formally appointed to serve as the ultimate authority.   Expertise resides in those front-line people who actually do the work and who thus have far more expertise in certain areas than the formal leader who is organizationally positioned quite far from the front-line.  In the aviation safety model of CRM, leadership is, in fact, defined not only in positional terms – the person who sits in the left seat and has the four stripes on his or her uniform.  Leadership is defined in practical – i.e. in practice –terms.  In CRM the “mature leader” is specifically defined as the person who helps everyone on his or her team perform their job efficiently and effectively and who is able to manage the resources on his team, which means recognizing what knowledge, skill, and expertise they have so that they can manage it.  (It’s pretty tough to manage what you don’t know exists).   The pre-requisite of such effective management is recognizing and then publicly, explicitly acknowledging that the leader isn’t the only expert and that other people on the team have their own expertise.  In fact, bringing together differing kinds of expertise is what makes a team a team.  This is what Karl Weick and Kathleen Sutcliffe mean when they say that High Reliability Organizations (HRO’s) are characterized by “deference to expertise.”  Their categorization of “deference to expertise,” as one of the five key characteristics of an HRO is a direct repudiation of the concept of leadership as a preoccupation/obsession with status, command, and control and an insistence on the primacy of front-line knowledge, and of leadership as the ability to help people mobilize that knowledge so they can all use it to accomplish a shared goal.   Indeed, in this model, one of the primary facets of the expertise  – or in the current jargon – competence — of a leader is the ability to recognize the limitations of one’s own knowledge and to recruit others to fill in critical knowledge/expertise gaps so that risk can be avoided and reliability assured.  To develop this kind of expertise requires work, training, thought, and a whole lot of practice.  There are some places that are doing this in healthcare.  And it is working.  Which is why I wanted so much to share this post and Michael’s experience with those reading my blog.  Michael was so impressed because he recognizes how much things can change when there is the will to change them.  We have a way in healthcare, what we need is the will.