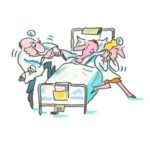 It is National Patient Safety Awareness Week and we need to be aware of a serious patient safety problem. That is the failure of many health care professionals to understand the work of their colleagues in other professions or occupations.  This makes it difficult for people who should be working  together on real teams  to value, respect, and share critical information  with one another– particularly when making critical patient care decisions.  The relationship of physicians and nurses is today, as it  has historically been, emblematic of this problem.

Several years ago, for example, a chief resident at a major teaching hospital asked the Dean of the university’s school of nursing if she could explain what nurses actually do. Can you imagine a quarterback asking a coach to explain the role of a defensive end or a pitcher wondering  what precisely the third baseman was doing out there?  This lack of knowledge is, however, typical or the “healthcare team.”

Sadly, for patient  safety, physicians-in-training aren’t the only ones who seem to find the work of their nursing colleagues an impenetrable mystery.   In a recent article in the New York Review of Books, one of the most famous physicians in the world publicly confessed that  he never really appreciated the importance of nursing until he recently broke his neck and landed in an ICU and then a rehab hospital.

At age 90,  Arnold Relman was the  editor of the New England Journal of Medicine. a medical educator and long-time commentator about healthcare policy.  And yet, he writes that,  “I had never before understood how much good nursing care contributes to patients’ safety and comfort, especially when they are very sick or disabled. This is a lesson all physicians and hospital administrators should learn. When nursing is not optimal, patient care is never good. “

Relman’s ignorance about the work of the largest profession in healthcare – people with whom physicians work day in and day out–  is not due to the fact that he’s an nonagenarian – an elderly physician whose attitudes will soon be a thing of the past.   The chief resident who couldn’t figure out what nurses contribute to patient care was in his early 30’s. Many of the medical students and physicians-in-training who don’t consult nurses about patients before they enter the patient’s room are also 20 or 30 somethings.  And the majority of physicians who still yell at nurses when they are woken in the middle of the night or who, studies reveal, abuse or disrespect RNs aren’t all old fogies.

Nor is the problem of physician’s misunderstanding of the role of non-physician players on the healthcare stage limited to RNs.  Nutritionists, physical and occupational therapists, social workers, pharmacists all complain that physicians fail to understand the contributions they can bring to patient care and underestimate their knowledge, skill and expertise.   The language of contemporary medicine reflects the extent to which physicians have been programmed (I use this word advisedly) to disregard and devalue their non-physician colleagues.  In the 19th century, a noted physician described nurses as follows,  “There is no proper duty which the nurse has to perform, even to the placing of a pillow, which does not or may not involve a principle, and a principle which can only properly be met by one who has had the advantage of medical instruction.  It is a fundamental and dangerous error to maintain that any system of nursing has sources of knowledge not derived from the profession.”

Things have not changed much in the ensuing 150 years.  In the contemporary medical lexicon many non-MD health professionals are called “mid-level” providers or “allied health professionals” – allied to medicine that is.   As “mid-levels” or “allied”s, nurses, for example, are routinely described as “physician-extenders” or as “the doctor’s eyes and ears” or sometimes even “hands and feet.”

Whether they are depicted as upper or lower extremities, this Adam’s rib view of the nurse and other non-MDs  promotes the notion that there is only one mindful professional in the healthcare workplace – the physician.  Almost everyone else, it seems, is a mindless automaton who is  attached by some invisible line to the physician’s brain since they don’t seem to have one of their own.   This conception of mindful and mindless work has, in fact, contaminated all of health care.  Nurses commonly refer to nursing aides and assistants as nurse extenders.  PTs have their own set of extenders as do pharmacists and many other health professionals.

This practice ignores the fact that many different kinds of health care workers have knowledge and skill, which they, in fact, mobilize not only to assist the physician but to save lives  and enhance the quality of patient care.  (Consider for example, the fate of the patient who has the best brain surgeon but whose RN is so over-worked he fails to notice the signs of a blood clot, or who contracts a hospital super bug because the housekeeper didn’t have time to adequately clean the room.)

All over the country, hospitals and healthcare professional schools are implementing programs to teach healthcare professionals and other workers to function collaboratively, as members of an inter-professional team.  Problem is, in most of these programs, physicians remain the captains of the ship and leaders of the team. How, one wonders, can they lead effectively if they have no idea what their crew members are doing?