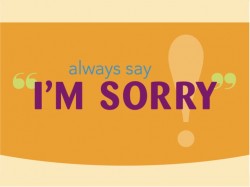 Did your parents teach you to apologize to people when you did something not quite right (0r very wrong)?  Mine did.  It seems like these lessons in basic manners are constantly violated in many healthcare settings.  In spite of the fact that studies confirm that patients are less likely to sue when a physician or hospital apologizes for a mistake or mishap, lawyers and risk managers are still advising physicians not to apologize to their patients for any mistakes.  The theory behind this violation of basic human courtesy is that the apology will be considered an admission of wrong-doing and lead to a lawsuit.  It’s worth repeating that the advise given contradicts not only common humanity but alsodocumented research that shows that patients will be more likely to sue in the absence of an apology than because of one.

I recently talked with a consultant whose experiences embodied  the power of apology as well as why apologies matter.  Here’s the story:‘I had some dealings with an institution which had contracted for some work.  I’d spent months hammering out the details with a person who was by institutional liaison.  There were some hints that her boss was a bit nervous about the direction the project was taking but we continued.  The team leader only hinted about his concerns and never explicitly expressed them so it was impossible to figure out how to address them.  Suddenly, the group decided to cancel the project after months of work.  They used their liaison to send a standard kiss off email — you know the kind, ‘We have decided to change direction…. so just go away.’  They paid me for the work I’d done but I had no idea what really went wrong and felt terrible about the process. For several days, I couldn’t reach my contact at the institution.  Then finally, she called.  It turned out she was so distraught by the group’s decision that she felt that she would have been unable to talk to me without bursting into tears.  Upon hearing the pain in her voice and how upset she was about what had happened to me, I felt almost worse for her than for myself.  I was still upset with the institution but not with her.  In fact I was really worried about her.  She had to remain working with these people.  I was well out of it.

“Before talking to her,” the consultant continued,” I was tempted to call my lawyer.  I felt royally screwed.  After talking to her, I felt very differently about the experience.  I felt we had a bond that, for me, at least, partly healed a significant wound.  Obviously, if they had completely violated our agreement I would have sought legal counsel.  But in this case, that was not necessary.  The apology counted for a lot.”

Contrast this experience with another friend whose wife had what was supposed to be a simple surgery — a matter of no more than 3 days in the hospital — and ended up spending three months in the ICU and almost dying.  When, after a month, the surgeon finally appeared to talk to the family, his “apology” consisted of the following:  “This is a very humbling experience for a surgeon.”  Because the so-called apology was all about him and his feelings, not about what had happened to the patient, can you imagine what the family did?  You got it — they reached for the phone and called a lawyer.

Apologizing is an act of real significance.  In his book On Apology, Aaron Lazare explains just how complex the act of making an apology is.  In his book, Healing Words: The Power of Apology in Medicine, physician Michael S. Woods argues that physicians need to relearn the art of apology.  Indeed, Woods insists that this is a moral duty of healer to patient.  He also argues that physicians must not offer pro forma apologies but “authentic apologies” and shows them how to do that.

On the other side of the Team Intelligence card that began this post, I offer similar advice.  See what you think of it. 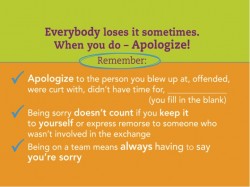