This is a great article from The American Prospect about Brexit.  I read it and thought about healthcare elites and the VHA. 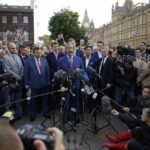 Who’s to Blame for Brexit? The Elites

Britain’s vote to leave the European Union was driven by right-wing populism, but the real blame must be laid at the feet of elite technocrats who have bungled the European project.

Over the past decade, elites broke the world, and were unrepentant about their failure. They created the conditions for the worst economic crisis in nearly a century, and made sure that their elite friends at the top would scoop up the post-crisis gains, stranding the vast majority of people. They decided their project of globalization and liberalization mattered more than democracy. Brexit is among the first tangible responses.

Yes, the victorious campaign to leave the European Union won on the basis of xenophobia and the demonization of immigrants. For anyone of a cosmopolitan bent it’s a terrible outcome. And those with long enough memories to remember the last time European nations broke apart instead of coming together will be pained by the outcome.

Practically all of the U.K.’s elites—including the leaders of both major political parties—supported remaining in the EU, and couldn’t convince enough of their citizens to go along.

But if you tell people you know what’s best for them for years and years while their prospects wither and their lives are immiserated, at some point you should expect some kind of reaction. Practically all of the U.K.’s elites—including the leaders of both major political parties—supported remaining in the EU, and couldn’t convince enough of their citizens to go along. Democracy was the poison pill that halted the European project. And now, its architects have a choice to make: admit nothing is wrong with their abhorrent excuse for leadership and lose the rest of the continent, or change course and embrace the views of their citizens instead of ignoring them.

Consider how Europe acted after the 2008 financial crisis. They demanded balanced budgets and even surpluses from member countries that had no ability to both run them and provide for their citizens. They viewed every appeal from those countries, assembled mostly in southern Europe, as a personal affront. They turned a global recession into a morality play, so they could scold the weak sisters of the Eurozone as lazy slugabeds who deserved to suffer.

And they didn’t just do this out of spite: they explicitly wanted to empower multinational conglomerates at the expense of independent domestic producers. Last year’s list of demands for the Greek economy from the “troika” (the European Union, European Central Bank and the IMF) had little to do with preventing corruption and furthering economic opportunity. They were mostly about breaking the power of the local publishing industry, journalists, olive oil makers, mom and pop retailers, and so on. The goal was to make way for outside corporations and throw over the internal political and social culture.

Now, you could ask what the United Kingdom has to do with all this. They weren’t part of the Eurozone. They didn’t play a role in northern European cruelty toward their southern neighbors.

But they did follow the general belief in expansionary austerity, that you could cut your way to prosperity. For those that don’t recall, this led to the brink of a triple-dip recession, and terrible growth numbers for years and years. Only when an election neared and David Cameron’s Conservatives stopped the budget cutting did the economy come back to life. “If this counts as a policy success, why not try repeatedly hitting yourself in the face for a few minutes?” Paul Krugman asked in 2015. “After all, it will feel great when you stop.”

If the economy had returned to something resembling normalcy, why was the Leave campaign able to scapegoat immigrants and onerous EU regulations and win a majority? First of all there has been an undercurrent of bolting the EU in Britain for over forty years, since the joining of the European Common Market in 1973. While places like Greece were culturally tied to the EU despite being pummeled by it, the UK always harbored dreams of breaking free and restoring their noble empire.

But you must pair that with the arrogance of the elites, both in London and Brussels, to the growing desperation in the countryside. The technocratic administration of policy in the EU is obtuse to the average Briton or Italian or Frenchman. They viewed democracy the way most people view mosquito bites, as a nuisance rather than a collective voice worth listening to. Euroskepticism grew amid this neglect. For all the talk of burdensome migration, Leave did best in rural communities with few, if any, immigrants. These are the cities and towns that lost out from globalization, where deindustrialization has wiped them out and left them flat. Anger at economic stagnation played as much of a role in Brexit as anger at faceless foreigners allegedly ruining British society.

The Remain campaign tried to tamp down this anger with lectures, talking down to the rubes in the backwoods and explaining how they didn’t know what was good for them.

The Remain campaign tried to tamp down this anger with lectures, talking down to the rubes in the backwoods and explaining how they didn’t know what was good for them. This has been pre-eminent rhetorical technique among globalization enthusiasts for decades: that they would fix everything if the public would only listen. What they have fixed is a transition of wealth into financial centers and corporate coffers, and a denuding of societal character in favor of a global monoculture.

What Leave offers, a toxic stew of isolation and racism, isn’t any good either. But when elites spend this long doing nothing for large swathes of the population, they’re willing to listen to anyone with a different idea.

The immediate outcome after Brexit is unclear. The EU has two years to negotiate the terms of the UK’s departure, and perhaps even longer. A trade deal along the lines of Norway or Switzerland would not necessarily lead to the disruptive scenario feared by many. The real X-factor is how the European Union’s policy leadership responds.

There’s a school of thought that, with the UK out of the way, the Eurozone can finally create the kind of tight fiscal and banking integration that would build a United States of Europe. The Eurozone institutions are far too weak for a common currency, without fiscal transfers or unified banking rules to smooth over the discrepancies among the member states. Now that nearly all of the EU is either part of the currency or on track to adopt it, they can begin the path to a full union, the theory goes.

But arrogance has been the default switch of the elite technocrats, and member state publics would revolt if Brussels tried to grab even more power now. If Europe responds to Brexit by consolidating more control, they’ll have learned nothing from the yearning for people to free themselves from the yoke of unaccountable external rule, and the UK won’t be the first to leave.
Nationalism can be ugly. But so can rule from a secret chamber abroad, for the benefit of corporations. The post-World War II social order has failed too many, and people are desperate for an alternative. As much as the toxicity of right-wing populism is driving this disruption, ultimately the blame must be laid at the feet of those who bungled the European project so completely.

Amazing Story About Innovation in a VA ICUHealth Care, Uncategorized
VSOs Send Letter Protesting Another Effort to Privatize the VHAUncategorized