What Patient Safety Can Learn from New Airline Safety Videos 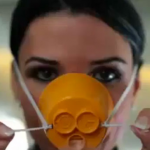 I’m writing this blogpost from the Delta airplane that I’m traveling on to Detroit to speak at a patient safety conference in Windsor, Canada. I’ve been wanting to write about airline safety videos for some time and what better moment to do so then after I have just seen one.

Airlines want passengers to watch their safety videos. Just like doing a checklist keeps you safe, so too the safety video reminds you that, to be safe, airline travel involves managing threats effectively. Part of the Crew Resource Management training we have written about in Beyond the Checklist: What Else Healthcare Can Learn from Aviation Teamwork and Safety contains modules on Threat and Error Management. Like any high reliability industry, commercial aviation is preoccupied with failure. That means that no matter how successful an airline — or the industry as a whole — has been, it can never skate mindlessly on that success but must be consistently mindful that things can and will go wrong. Threats are everywhere and the best way to prevent, manage, or contain them is to be mindful of their existence and prepare for them.

It’s not only pilots, flight attendants, mechanics, etc. who prepare for threats, it’s also passengers who must know about the ones they can manage – like putting on your oxygen mask if cabin pressure changes (you better do it quick because you only have seconds – not minutes – before you pass out, which is why they tell you to put your mask on you before you help someone else. If you don’t, you won’t be conscious and no help at all).

Thus the safety demonstration of the aircraft before takeoff. We should all watch it. But then, “why bother?” we think. We’ve seen it hundreds of times. It never changes. Fasten your seat belt, look for exits in front of and behind you, here’s what happens in a water landing. So what else is new? Better to read the paper, check the email, or continue knitting. In order to capture the attention of weary, jaded travelers some airlines have used an enormous amount of ingenuity and creativity to seduce us to look at the screen and the safety video. It all started with Air New Zealand and their nearly naked flight attendants covered in skin tight outfits. It followed with an amazing video based on The Hobbitt series. As Air New Zealand describes it, “As the official airline of Middle-earth, Air New Zealand has gone all out to celebrate the third and final film in The Hobbit Trilogy – The Hobbit: The Battle of the Five Armies. Starring Elijah Wood and Sir Peter Jackson; we’re thrilled to unveil The Most Epic Safety Video Ever Made.

In the video, directed by the movie series director Peter Jackson (who appears in it) every safety instruction is accompanied by a clever take from the trilogy. Even some of the actors, like Elijah Wood, appear in it. I wish I could fly Air New Zealand all the time (I’ve flown it several and it is a super airline) just so I could watch the latest safety video.

Air New Zealand inspired other airlines, like Delta. Delta’s is a hoot and it also seems to change constantly. Today’s, which is version 5,  had a hunky guy buckling his seat belt with hands painted with bright pink fingernail polish. When the video asked people to stop using their laptops and Ipads, one passenger stowed his laptap while the gentleman next to him continued to use an abacus. When the video mentioned the use of unregulated electrical devices, a passenger in a middle seat put away her electric mixer and took out a long wooden spoon to beat a cake being mixed in a large bowl. Three clean shaven guys with red hair seated in the exit row refused to comply with the instructions for opening the doors and left in a huff, only to be replaced by three similarly dressed guys – also with red hair – but this time with beards. Even the captain got into the act. At the end of the video, he thanked us for flying Delta. He was wearing an old fashioned leather aviators’ cap with goggles and had a white silk scarf which he jauntily flipped around his neck before taking off.

United’s safett video  features a captain in a French café advising customers that they must obey the cabin crew at all times and a flight attendant grabbing a cab in Manhattan telling the driver to fasten his seat belt.

From there we move to Japan, what looks like Miami and other tourist spots. These clever media tactics work. Everyone I saw around me was pretty much riveted to the screen. I wouldn’t consider not watching the video just to see how they have changed it. And I now check out the videos of other airlines to see if they decided to do something similar. Some have.

There is a lesson here for those of us concerned with patient safety. The message of patient safety is all too often conveyed in the dullest way. A catalogue of scientific evidence is marshaled through PowerPoint presentations, in journal articles, and in other kinds of lecture, or didactic formats. Of course, it is critical to have scientific evidence to back up arguments and make sure that what one is doing is effective. But the data, information, and arguments that are intended to convince people to change their behaviors and attitudes and do the right thing don’t always have to be presented in ways that do not engage but rather either hector, admonish, or lecture their audience. Think about it, if you want a guy to put on a condom before having sex, do you present him with an article about HIV prevention from JAMA? Or do you try to make wearing condoms (or getting tested for HIV) cool, as various clever and arresting public health campaigns have done with greater success?

Public health campaigns, airline safety videos, and other media campaigns (check out Pantene’s campaign to get women to stop saying they are sorry to men for simply existing) are proof that you can get people to engage with the message if it is clever and presented in an engaging way. I and some colleagues have actually formed a small group called HIIP (Healthcare Innovation in Practice) to do just this and I will be telling you more about this later.

For now, next time you get on a plane check out the safety video. And think about how using more clever messages (and the right messages) could be used to advance patient safety and healthcare quality.