Focusing on the Top of the Pyramid: Bad Idea for Patient Safety 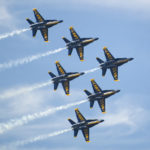 Last summer, I attended a fascinating conference put on by CAE Healthcare, a company that specializes in healthcare simulation and that is part of CAE, the largest aviation simulation company in the world.  The conference gave me greater insight into the promise of simulation technology in healthcare.  More on that later.

What I want to write about here, is the message of first speaker at the conference.  He was a former Blue Angel – for those not into aviation, the Blue Angels are the elite flying squad of the Navy – John Foley.  Foley, like many other former pilots, is now on the business/healthcare/management speaking circuit.  His message is one that is dominant in the management world and demands exploration and comment.

Foley spent most of his  talk treating us to videos of the six Blue Angels flying in spectacular fashion – upside down, left side right, right side left, flying perilously close to one another and just missing each other (quite on purpose of course).  Foley explained that the distance between the planes might be as close as 18 inches or 36 inches, and discussed the incredible teamwork it takes to make this happen at frightening speeds, without killing anyone or crashing any planes.  That is, of course, a good message for folks in healthcare to hear.  One cannot mention teamwork enough when it comes to healthcare audiences.  Foley also discussed the enormous time and effort the Blue Angels put into briefings and debriefings.  Foley also mentioned the team of non-flying staff –120 including mechanics etc –without whom the Blue Angels simply cannot function.

Foley’s business pitch was on high performance: How can your business fly like  the Blue Angels?  Obviously, every one in the audience wanted to know the answer to that question, as it seems, do all the business folks who are very focused on excellence.  Foley talks about vision, clarity, etc, and seems to suggest that we can all – or most of us anyway – copy the Blue Angel model and become the top of a pyramid he uses as his main powerpoint icon.  Down at the base of the pyramid are the majority of folks.  Up at the top – where we apparently should aspire to climb – are the 1 % or perhaps even 0.1 %.  The problem is that this focus on the 1%, produces the kind of pyramid I have created (with the help of the wonderful graphic designer Malgorzata Podlaska) a facsimile of this high performance pyramid which you see here.

And therein lies the problem – for healthcare in particular and the world in general.  Patients lives don’t just depend on the 1% who get it right.  They also depend on the 99% — the folks people tend not to focus on – but upon whom their lives actually also depend.  Think of it like this.  Yes, your life depends on the skill of that proverbial brain surgeon whose stats you have – hopefully – so carefully researched and who has – hopefully –performed the operation you are about to have for the ten thousand hours or more that generates expertise.  But guess what?  Your life also depends on the skill of the neurosurgical nurses in the OR, the OR techs who prepare and clean the equipment used, nurses and aides in the Post Anesthesia Recovery Unit (PACU) and all kinds of staff on the floor on which you will be recovering.  Your life depends, for example, on the housekeepers who will clean your room and who, hopefully (a big hope given current realities – see Dan Zuberi’s book Cleaning Up have the knowledge and skill to do it correctly and protect patients from superbugs like MRSA.  This is why the VA system enlisted housekeepers as key players in their successful effort to combat MRSA in all its 152 hospitals — an effort which lead investigator Rajiv Jain described in his article in the New England Journal of Medicine and in comments in an essay in our book First Do Less Harm.  If we don’t focus on all of these people, patients will continue to die.  Which is why the healthcare pyramid has to include everyone and look like this.

Focusing on the Top of the Pyramid: Bad Idea for Patient Safety2014-03-082014-03-08https://suzannecgordon.com/wp-content/uploads/2017/03/suzanne-gordon-logo.pngSuzanne Gordonhttps://suzannecgordon.com/wp-content/uploads/2017/03/suzanne-gordon-logo.png200px200px
Comments