Beyond the Checklist –Our New Book About Patient Safety 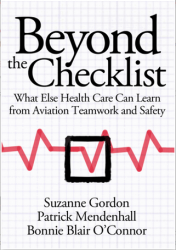 I am delighted to let readers of this blog know about our new book, Beyond the Checklist: What Else Health Care Can Learn from Aviation Safety and Teamwork, which was just published in the series on The Culture and Politics of Health Care Work that I co-edit for Cornell University Press. I wrote the book with international commercial airlines pilot Patrick Mendenhall and medical educator and ethnographer Bonnie Blair O’Connor.

As the title suggests, the book is a very detailed look at the aviation safety model (ASM) known as Crew Resource Management( CRM) or, in its contemporary iteration, Threat and Error Management(TEM). We were delighted that Captain Chesley “Sully” Sullenberger agreed to write a foreword for the book. The book is designed to help people in critical industries like healthcare understand how aviation became safer and how they can adapt the aviation safety model (ASM) to their work — particularly when it is in healthcare, which should be a high reliability industry but which has a ways to go to attain that status.

Although this book was truly a team effort, as the lead author on the book, I want to briefly describe its content and history. I conceived the idea for the book a number of years ago — I can’t remember if it was seven or eight (or maybe even nine), when I was contemplating the vexing problem of team relations — or the lack of them — in healthcare. It was pretty clear to me — as it is to so many observers, whether clinicians or patients — that the lack of good communication and teamwork in healthcare has serious downstream affects on patient outcomes and safety. It is also pretty clear that lack of good communication and teamwork creates significant workplace tensions that, in turn, produce often dissatisfied and demoralized staff. The lower on the totem pole the person, the worse their demoralization.

When I looked into the literature on patient safety and teamwork, I kept hearing about something called Crew Resource Management (CRM) in aviation. I read about CRM and one day, I just decided, ‘Okay, I’m a journalist, I get to call people up who I don’t know and ask them lots of questions. I’ll start calling up people involved in CRM.” And I did.

One of the people I talked to was Robert T. Francis, who worked in the Federal Aviation Administration (FAA) for years before becoming vice chairman of the National Transportation Safety Board (NTSB). What he told me was too tantalizing to resist. As he explained, “The transformation that has made aviation safer is the result of a fundamental shift in perceptions and definitions of authority and deference that has taken place in aviation over the past three decades.

Thirty years ago the captain would come in to the cockpit and either directly or indirectly convey the following to the first officer and flight engineer, “I’m the captain. I’m king. Don’t do anything, don’t say anything. Don’t touch anything. Shut up!” Now, it’s “I’m the captain, I’m king.Please tell me if you see me making a mistake.”

The result: There are fewer airplane crashes and far less tension in workplace relationships.

After that conversation, I was convinced that the aviation safety model (ASM) had much to teach those in healthcare who also work in a toxically hierarchical environment where vulnerable human beings rely on the actions, insights, and information of many different players — many of whom, like those in aviation 30 years ago– have important information but are afraid to speak up.

I recruited long time colleague Bonnie O’Connor to join me and then, several years later, Patrick Mendenhall. We have written this book because we are convinced that the aviation safety model(ASM) can and must be adapted to health care — as well as to other industries that should be highly reliable but are not yet. We are also convinced that many in health care do not really understand what CRM/TEM really is.

Many people believe the aviation safety model can be reduced to a series of checklists — or other technical fixes. They think aviation is too different from health care and that there isn’t that much to learn from the ASM. While there are certainly many techniques and tools in the ASM that can be applied or adapted to healthcare, what happened in aviation is nothing less than a top- to- bottom, bottom- to -top culture change that transformed not only how people act but how they think about communication, teamwork, workload, threat and error management and even technical proficiency.

Aviation and healthcare are, of course, different. But the fundamental principles of how aviation transformed its culture can  — and must be adapted to healthcare if patients are to be safe. The lessons of aviation are very useful to physicians who are team leaders but who may have little training in how to lead collaboratively,  to nurses — who are often taught to belittle themselves because they are “Just a Nurse “… and to many others in health care professions and occupations.

We hope people will read the book.  We hope you will look at the video, which was produced by Edwin Herzog and Bob Laird, and which has a narration donated by the great actor Peter Coyote and feel as excited by the prospects for change that we do.