Bad Day for Veterans at HVAC 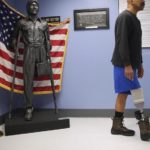 Not a single veterans service organizations was asked to speak last week at the House Veterans Affairs Committee’s hearing on the final recommendations of the VA Commission on Care, though such groups represent millions of former military personnel.