Who Will Deliver This Papal Message Message To Our “Healthcare Curia?” 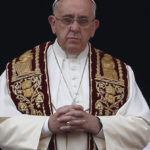 Several weeks ago,  Pope Francis, who is rapidly becoming my favorite pontiff, delivered a not-so-cheery Christmas message to the hierarchy of the Catholic Church.  The Pope’s address was directed at “the Curia.” This church leadership body includes Cardinals and other high-ranking ecclesiastical officials who are definitely not used to being admonished, by their boss, for displaying symptoms of the personal and organizational “diseases” that the Pope described at length.

High on his list of ailments afflicting the Curia is the “sickness of poor coordination [that] develops when the communion between members is lost, and the body loses its harmonious functionality and its temperance, becoming an orchestra of cacophony because the members do not collaborate and do not work with a spirit of communion or as a team”.

He warned about Church officials who “transform themselves into masters and believe themselves superior to others, rather than at their service.” They are prone to “the ailment of rivalry and vainglory: when appearances, the colour of one’s robes, insignia and honours become the most important aim in life. …”

Preoccupied with their owns status, they may also present “the funereal face: or rather, that of the gruff and the grim, those who believe that in order to be serious, it is necessary to paint their faces with melancholy and severity, and to treat others – especially those they consider inferior – with rigidity, hardness and arrogance.”

The Pope also warned of “indifference towards others (that) arises when each person thinks only of himself.” The Pope also pointed about what happens “when the most expert does not put his knowledge to the service of less expert colleagues.”

Francis also decried a parallel “mental and spiritual hardening”—the condition “of those who…conceal themselves behind paper, becoming working machines” and “limiting themselves to bureaucratic matters, thus losing contact with reality and with real people.”  It is very unhealthy, he said, when leaders “lose the human sensibility necessary to be able to weep with those who weep and to rejoice with those who rejoice!” They become “people who experience service thinking only of what they might obtain and not of what they should give.”

Francis urged the Curia to cure itself of the “ailment of excessive planning and functionalism: this is when the apostle plans everything in detail and believes that, by perfect planning things effectively progress, thus becoming a sort of an accountant. … One falls prey to this sickness because it is easier and more convenient to settle into static and unchanging positions.” A proper institutional spirit should reflect “freshness, imagination and innovation,” he argued.

The Pope warned about the disease of “excessive industriousness; the sickness of those who immerse themselves in work” and whose failure to set aside “time for spiritual and physical replenishment” or get “necessary rest leads to stress and agitation.” Finally, and perhaps most aptly, he railed against “disease of worldly profit and exhibitionism: when the apostle transforms his service into power, and his power into goods to obtain worldly profits or more power. This is the disease of those who seek insatiably to multiply their power and are therefore capable of slandering, defaming and discrediting others, even in newspapers and magazines, naturally in order to brag and to show they are more capable than others”.

Reading this list of diseases to which his colleagues have sadly succumbed, I couldn’t help but wonder what kind of holiday counseling Pope Francis might have provided to health care industry leaders – if it was also his responsibility to change the organizational and individual behavior found in too many hospital C- Suites, on medical executive committees, or in other management or academic bodies.  Top leadership’s failure to transform the culture of healthcare is responsible for the terrible patient safety statistics that have barely budged since the 1999 Institute of Medicine Report on preventable patient deaths and injuries.  These failures are not only system-wide in the US but in many other countries.

I doubt that the Pope will soon be enrolling the Curia in TeamSTEPPS training. But when he notes the absence of real collaboration within that body, he could be targeting every healthcare institution that pays lip service to the “healthcare team,” while refusing to invest in the kind of inter-professional training and workplace change that would make teamwork a more widespread reality. Think also of the people at the top who consider those at the bottom to be lesser beings who should merely salute, obey, and keep their mouth shut.

Our “healthcare Curia” may not favor purple robes and rings that need to be so publiclly kissed, but symbols of healthcare pomp and privilege can be just as pernicious. These include the misuse of titles – most notably that of Dr. – to put people down rather than identifying a role or function. I think here of Nurse Practitioners who don’t want anyone to think, God forbid, they are just a nurse and are now trying to out Dr. physicians. Or non MDs like a PhD psychologist I met the other day, who brusquely reminded me that she should be referred to as Dr.

Or what about physicians who insist on wearing their robes of glory – white coats and, for men, ties, even though we know they are a serious infection hazard.  Talk about rivalry and vainglory.  It’s as vicious a disease in our temples or healing as it apparently is in the halls of the Vatican.

When Francis warned Curia members about “becoming a sort of an accountant,” he could easily have been referring to the folks who run healthcare today and who believe that it doesn’t count if you can’t count it.  These are the folks who don’t enforce appropriate standards of behavior and safety protocols in hospitals and other healthcare institutions, but who rigorously enforce the financial policies that have turned healthcare from a service into a business, patients into consumers, and healthcare professionals into mini- MBAs.

As for the disease of Marthaism, I can’t help thinking of all of those top level and middle managers who urge their staff to shoulder unbearable workloads or who fail to give them rest time and respite. Maybe they themselves have become too tired or stressed out to think straight. All I know if some healthcare administrators or top medical and nursing officers insist that people can safely work 60, 70 or 80 hour weeks, with 12 to 14 hour days. This in spite of all the scientific evidence documents that people can’t function well when they are stressed, exhausted, and hungry. Sadly, it’s not only healthcare administrators who believe this myth. Many nurses and physicians and other healthcare professionals believe they can work on nothing but adrenalin. They are as poor judges of their own limitations as the Curia in Rome.

As for those who are indifferent to others, I cannot help hear echos here or doctors and nurses who blame patients for “failing the therapy” and worship at the altar of “throughput” rather than quality or safety.  And when it comes to worshiping at the altar of “worldly profit or exhitibtionism,” healthcare definitely matches the Vatican’s opulence idol for idol. We spend fortunes on the construction of more marble palaces, on exorbitant salaries for insurance company executives, on high priced consultants peddling the latest healthcare fad, and payments for unnecessary treatments recommended by medical specialists who ignore the evidence of their harm. And we fail to give either moral or financial incentives to encourage more people to enter fields like primary care, geriatrics, or palliative care – to name only a few of our misguided financial and moral priorities.

Pope Francis has turned his attention to The Curia, to Cuba, and to many other social issues that demand immediate attention. Maybe, in the New Year, he will consider taking a look at healthcare and helping those who claim to be healers heal themselves.