Shame and Blame with Ebola 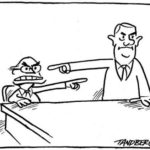 As I’ve traveled around the country recently talking to nurses, doctors, and others in healthcare about the recent Ebola scare, I am struck by how many people have been quick to blame nurses and other healthcare workers for what happened in Texas.   There seems to have somehow been a glitch – a very serious one – in communication between emergency room physicians nurses regarding Mr. Duncan’s care. Although it is impossible for us to know precisely what happened in this case, what seems clear is that nurses knew that Duncan was suffering from a fever but did not convey this with enough urgency to emergency room physicians. Similarly, emergency room physicians seem not to have read the nurses’ notes section of the patient’s electronic medical record. As a result of this and many other problems, Duncan was not admitted to the hospital early in his presentation of Ebola. He was instead discharged and took the disease into the community and did not get speedy treatment, which might have saved his life.

In my discussions of this case, many nurses and physicians I talked with were very critical of the actions of the nurses in the care and treatment of Mr. Duncan. Why they wondered, didn’t the nurse who noted Duncan’s symptoms urgently convey her concerns to the physician. Why another nurse on a blog opined, didn’t the nurse arm wrestle the doctor into listening to her. The harshness of the comments on the nurses’ – and physician’s behavior – escalated in each conversation we had. One nursing professor even told Suzanne that she blamed nurses in the hospital for not knowing how to properly protect themselves from the virus. They should know, she insisted, what to do to protect themselves from Ebola. They are nurses, after all. We are scientists she haughtily insisted. Never mind the fact that most nurses – like most doctors – are not scientists and that there is a difference between learning science and being a scientist. The point here is that blaming people does not help.

What we need to do is understand why reasonable people with good intentions acted the way they did.  The questions we must ask are:

Did nurses have enough education about the threats of Ebola?  Do they work in a psychologically safe environment, where people are encouraged to speak up and rewarded when they do? (Answer in Texas, is no they are not.  Consider the case of the two nurses who were fired — one prosecuted — for reporting a physician to the Texas Medical Board for bad practice.  Message to nurses — never challenge a physician).

What about fatigue and overwork?  Was the physician who seems to have ignored the nurse’s notes in the chart overworked, exhausted, hungry, irritable?  Was he socialized to ignore the concerns of RNs whom he was also taught to consider to have little to offer but white noise?

And whose responsibility is it to know how to protect workers from infectious agents?  The worker or the hospital and broader healthcare system?

If we are going to really deal with the threats that face us, then we need to stop blaming and start helping.

By the way anyone who wants to understand why these scary new diseases are such threats should check out the book Spillover by David Quammen.