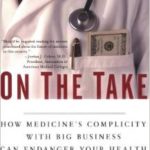 Please read this story in the New York Times “Detailing Financial Links of Doctors to Drug Makers. ”
We’ve all got to start protesting this kind of corruption of healthcare.  What this means is that patients  can’t trust what their doctor is telling them.  Jerome Kassier wrote about this problem in his fabulous book On the Take: How Medicine’s Complicity with Big Business Can Endanger Your Health, and it isn’t getting much better.  You cannot trust what your doctor prescribes as treatment because you don’t know if he/she is prescribing it because he/she is financialy benefiting from it or because it’s necessary.  Doctors are being perverted and converted to drug company shills.   We know, for example, that psychiatrists have been prescribing dangerous and unnecessary meds for children. According to Medscape’s Physician Compensation Report , physicians earned, in 2014, on average between $174,000 (HIV or Family Medicine MD and $414,000 (orthopedist) a year.  Yet apparently some feel they need an extra $500,000 from a drug company to make it in life. Even though these doctors do no represent all doctors, they pervert the process of treatment because they are the ones drug companies hire or influence to write articles and give speeches promoting problematic or unnecessary treatments.  This  process of influence peddling negatively influences the judgment of honest physicians.  And it subjects patients to unnecessary procedures and ineffective treatments that jeopardize their health.

Tragically new categories of providers are entering the influence peddling game, including NPs, PAs and some RNs.  Some of them are also on the take  because drug companies have discovered that many of them will accept pharmaceutical money.   They may not get as much as physicians but there is plenty of influence peddling going on in nursing.   Plus, NPs and PAs get information from the same compromised sources — journal articles written by physicians On the Take.  Everyone should read Jerome Kassirer’s book of the same title On the Take.  And Richard Deyo’s new book about the back pain industry Watch Your Back which we just published at our Cornell series.  I will do another blog on Rick’s book shortly.