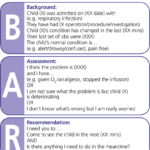 Since writing my rant on SBAR last week, I want to pursue the issue of standardization of communication in healthcare.  As I said in my earlier post, many patient safety experts insist, correctly, that healthcare is a very complicated endeavor.  There are many many factors, that people trying to deliver healthcare services cannot control.  They can’t always control the larger system, they can’t control the patient’s genetics, anatomy, physiology, psychological response, home environment, etc.  They can’t control the finances of their institution.  As I said earlier, the list goes on and on.  There are, however, things they can control and how they communicate with one another is one of them.  When one considers people’s response to communication techniques like SBAR —  a technique that has been promoted by TeamSTEPPS and many other organizations and institutions, the fundamental question is what is the purpose of communication?  Put another way, what is the primary goal of communication between those who work in healthcare.

When a physician explains that physicians do not like to use a technique like SBAR because that’s how nurses talk, not only does this evince a total misunderstanding of the genesis of SBAR (which was developed as a safety technique on nuclear submarines not in schools of nursing), it also suggests that the primary thing being communicated in healthcare is the difference in status between professions and occupations rather than the communication of critical information about the patient.  Physicians have been socialized to view nurses as inferiors and thus in the hidden curriculum of healthcare, they are taught to distinguish themselves from nurses by using different language than nurses use and by forbidding nurses to use medical language.  As we describe the history of this linguistic discrimination in our book Beyond the Checklist:

“In the health care workplace, the professional lexicon of medicine is the talk form, whose use is recognized by physicians to signal possession of authoritative knowledge and professional expertise. For well over a century now, nurses have been firmly instructed—both in their professional educations and in the policies and norms of their workplaces—to refrain from using such “medical language.” This proprietary language has been reserved for physicians because its use, in some circumstances, constitutes diagnosis (“the patient has pneumonia”), a function and privilege assigned by law as well as by long and carefully enforced custom to physicians only. On the basis of this legal privilege, nursing has been classified and categorized as subordinate to medicine, and its activities have been rendered largely invisible through what Geoffrey C. Bowker and Susan Leigh Star, authors of Sorting Things Out: Classification and Its Consequences, describe as the valorization of one point of view, which often renders another entirely invisible.

“Under penalty of disciplinary action, nurses have been enjoined, for instance, from saying or noting in a patient’s chart that that the patient “has developed a respiratory infection” or a “urinary tract infection,” or is “hallucinating.” This is medical-speak. Rather, nurses must report in descriptive terms the indicators that lead them to their suspicions. Thus a nurse would say, “The patient is experiencing frequency of urination and burning,” or “The patient is seeing little white elephants.” They are taught to leave the doctor to reach the diagnosis and apply the correct medical label. Both physicians and nursing managers reinforce these lessons by reprimanding or disciplining nurses who violate these linguistic norms. Nurses can even lose their licensure if found to be “practicing medicine without a [medical] license” (which includes making medical diagnoses). This penalty for “practicing medicine” (vs. practicing nursing) is explicit in states’ nursing practice acts.

“While physicians do routinely ask nurses to tell them about observations the physicians select as relevant, they do not generally read nursing notes in the patient record, which one junior faculty physician in an Ivy League academic medical center told Bonnie were “noncontributory” to essential patient care. Residents in one New England hospital characterized nursing notes in their patients’ charts as “not worth the time it takes to read them” because they are “way too wordy” and “never say anything useful.” In another New England teaching hospital where we have worked, nursing notes are in fact kept in an entirely separate chart from the one used by physicians to record medical actions and patient progress. (In a perhaps unconscious symbolic statement, the physicians’ charts are in gray-blue notebooks, while the nursing charts’ binders are a subdued rose color.)

“Neither the residents nor the faculty physicians in this hospital, participating in a 2007 discussion of strategies for improving interprofessional communication, had any inkling that nurses were actually not permitted to use the language they as physicians would have preferred, respected, and found authoritative; nor could they use the same shorthand forms (such as SOAP notes) for communicating their clinical impressions and recommendations. As this hospital made its transition in 2010 to electronic medical records, two separate electronic systems were put in place for physician and nursing patient records, thus further ensuring the separation of the two professions’ assessments, plans, and activity records, and reinforcing for physicians—by making them now physically invisible—the sense of the nursing notes’ irrelevance to patient care. The two systems are not linked electronically, and for the first six weeks or so of their deployment physicians could not gain entry into the nursing note system if they wanted to because they had not been issued password access.

“The lack of a common language and communication medium—or at least of mutual professional intelligibility—both creates and sustains friction between nurses and physicians, and the cumulative irritation runs in both directions. Nurses resent having their knowledge, expertise, and competence shrugged off by physicians, while doctors resent having to wade through written chart notes that do not come succinctly to the point with respect to patient data and the treatment directions they may indicate. Medicine continues subtly and not so subtly to at- tempt to laicize nursing knowledge and expertise, as nursing continues to create and implement structures to professionalize its knowledge and fully incorporate it into the inpatient health care environment.15 Given this lack of a shared language, it is difficult to imagine the members of any so-called multidisciplinary team creating a shared purpose and a shared mental model. This failure can have serious consequences. According to the 2012 report by the inspector general of the U.S. Department of Health and Human Services, Medicare estimates that 86 percent of adverse events in hospitals in the United States go unreported. Why? Not because staff are afraid to admit mistakes but because they actually do not share common understandings of what an adverse event is, who should report it, and what should be done about it.”

SBAR has been a way to correct this problem.  But it seems it is now victim of the same kinds of dynamics that created the problem in the first place.  So the real question is again, what is the purpose of communication – to communicate who is above and who is below in the medical hierarchy or to create predictable patterns of communication and behavior so that there is less chaos, disrespect, and confusion in the healthcare setting?  The entire edifice of patient safety depends on the answer to this question.