The Pope and Patient Safety?

Does anybody read the New York Times.  I do and today a really important picture was on the first page.  It looked like this. 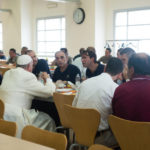 Check it out carefully.  Here is the caption: “Pope Francis had lunch with Vatican workers on Friday after he walked into the cafeteria unannounced and lined up, tray in hand. A cashier told the Vatican newspaper L’Osservatore Romano that she “didn’t have the courage” to hand him his bill.”  Imagine the message about status and hierarchy that would be conveyed in hospitals and healthcare settings all over the country if the Pope served as a model for physicians, administrators etc.  Imagine, if  tomorrow the chief of surgery wandered into the cafeteria at a major teaching hospital, bought his/her lunch and sat down with some RNs and began schmoozing.  Imagine if nurses sat with aides, or janitors, if MDs mixed it up with everyone.  Or imagine if RNs, PTs, etc and all sorts of staff at every level walked into the cafeteria and sat down with a group of docs and the docs welcomed them and stopped chatting with each other and began a real interprofessional/interdisciplinary conversation.

This is how things change.  When the usual suspects take unusual actions.  When they do the seemingly simplest things like making an introduction, saying hello, thanking someone for their input (instead of ignoring it, reaming them out, or rolling their eyes).  Several months ago, I did a team training with some RNs.  One of them told me a really sad but typical story.  She works on a neuro floor.  A neurologist came in to see his patients.  But instead of walking right by her, he stopped, introduced himself, and asked her how the patient was doing and what she thought the plan of care should be.  She told me she looked at him incredulously and asked him, “Are you sure you’re a neurologist?”  Honestly, that happened.  Really I couldn’t have made that up.  But how said a comment is that on contemporary relationships in the hospital.  A neurologist or any other physician stops, introduces himself/herself to a nurse and the nurse wonders if they are an imposter. And by the way, you could say the same thing for relationships between nurses and PTs or OTs, nurses and nursing assistants. etc.  You name it, the commitment to toxic hierarchy trumps normal human relationships over and over again in the hospital.  And don’t even get me started when it comes to how everyone relates to patients.

About a year ago I wrote a blog post about something I’d observed in the Netherlands, when my friend Vigfus Sigurdson, a professor of dermatology at the University of Utrecht, was showing me around his hospital.  He was drinking something and somehow broke a glass, which shattered on the floor.  When he told the nurse, she didn’t clean up after him, she handed him a small broom and dustpan and watched as he cleaned it up himself.  This was normal operating procedure in the Netherlands.  He did not complain.  She did not gloat.

A week ago, my friend and colleague John Chuo who is an attending neonatologist in a neo-natal intensive care unit (NICU) at the Children’s Hospital of Philadelphia told me a similar story.  He was showing a very prominent surgeon around the ICU.  They happened to pass a nurse who happened to drop a pen on the floor.  The surgeon stooped down, picked up it and gave it to her.  Again, a message of courtesy that trumps hierarchy.  John pointed out that this has to be the new normal if we are to achieve psychological safety and patient safety.

Imagine if over and over again people used their common humanity to trump hierarchy.  What a powerful message that would be!!