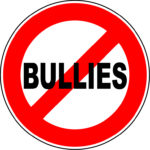 Ever since I wrote my blogpost on bullying, people have been commenting or tweeting or linking in with me about the issue.  Bullying everyone tells me, is everywhere.  Bullying or dealing with bullying, or saying you are dealing with bullying is very in. But once again, when I probe, what is described is not so much bullying as bad behavior generated by the model of toxic hierarchy that is alive and well in healthcare today.  I went back to my notes of a workshop that Kate McPhaul gave in a series of workshops to nurse managers that were presented during a Robert Wood Johnson Grant that we both worked on.  It’s worth quoting some of what Kate described as bullying.  According to the Workplace Bullying  Institute, workplace bullying is “ Repeated, health-harming mistreatment …that takes one or more of the following forms:

Bullies usually choose a target who is often someone who has a hard time defending themselves.

So think about what you imagine to be bullying.  Is what comes to mind disrespectful behavior that occurs because someone is tired, hungry, too stressed out, or has been taught to believe that he or she is the only one who has a brain and everyone else is essentially brainless?  Or is it a pattern of behavior that is threatening and that targets someone –usually someone who cannot defend him or herself — overtime?

The reason I think we have to be careful about our definitions is that it is easy to individualize and pathologize people by calling them a bully, which is, in fact, quite a stigmatizing term.  It’s also easy to individualize and psychologize the problem of poor workplace relations and lack of teamwork –rather than considering the systemic factors that produce uncivil behavior.  If you have real live bullying and a real live bully in your workplace, team training is not going to solve the problem.  But if what is described as bullying is really a failure or unwillingness to teach people what I call team intelligence through team training, coaching and other methods, then bringing in a counselor to deal with the bully is not going to solve the broader teamwork and communication problems.  I worry about describing everything as bullying because in today’s healthcare system managers and high level administrators may find it much easier to bring in a counselors to deal with an individual bully than to target the systematic need for team training and system-wide solutions to issues in the healthcare workplace.  If you’re not dealing with bullying but rather dealing with system wide communication problems then it’s time to do team training like TeamSTEPPS, conflict resolution trainings or to implement the kind of Code of Mutual Respect that Maimonides Medical Center in Brooklyn, New York implemented and that we describe in our book Beyond the Checklist.  In fact, whether your problem is bullying or not team training in healthcare is essential.  Managers and high level administrators must therefore be very careful to figure out what the problem is that people are dealing with and not be confused by fuzzy terminology.  Bullies must be dealt with.  Absolutely, but to create a healthy workplace it’s not enough to get rid of the bullies, you have to team train and coach people in how to work together interprofessionally.

And while we are on the subject of managers and management, I’d like to reprint here a comment I wrote on Linked In.  On the subject of bullying, someone had written that managers were sometimes the worst bullies, to which I replied with the following:

Having helped to lead a Robert Wood Johnson grant on teaching teamwork to middle level nurse managers, what we found that many managers ended up appearing to be unsupportive of their staff because they had no training in team building, conflict resolution, and little institutional support from higher level administration for dealing with problematic relationships whether up or down the power gradient.  Because of this, we discovered that nurse managers were ineffective or unwilling to engage in more supportive and constructive behaviors because they were simply in over their heads.  Rather than getting involved in something they didn’t know how to do – like dealing with conflict between staff or genuine bullies– they avoided taking any action except maybe disciplinary action.  Some may have been genuinely unsupportive but most were simply unskilled.  We tried to develop a training that would help managers develop these skills but I am afraid the grant was unable to have the wide effect intended.  I think that part of this problem can be addressed by upper level managers recognizing and stopping genuine bullying (If they are not part of the problem themselves). Managers play a huge role in solving many of the problems in healthcare but are all too often tragically ill equipped and unsupported themselves and thus cannot play a constructive role in helping those under them manage conflict and learn to better relate and communicate.