The Jazz Musicians and Patient Safety 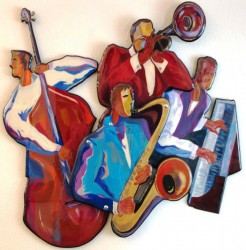 I wrote this in 2010, but thought it would be worth reposting as people are now considering more about teamwork and effective communication.  I think of this everytime I watch musicians on stage.  Healthcare has a lot to learn from this model.

About a month and a half ago, I had the honor of speaking to a group of nurses in Zurich, Switzerland. As I was waiting for my time on the podium, I watched from the audience as a quartet of jazz musicians played during the celebration. What was so interesting about their performance was the way they functioned both as a team and as a series of individuals. In true jazz fashion, the musicians, who were by the way, all women, began to play together. Then, they each had a solo, and then, seamlessly, they joined together again and finished the piece. Since they played about four pieces, I was able to watch this exquisite teamwork in action four times. As I was watching, I thought, wow, this is how it should be in health care. And of course my next thought was, how sad that this is almost never how, in fact, it is done.

In this case, the musicians were able to both work as a cohesive whole, and yet separate into their individual parts at a certain moment. Each was able to shine, each was acknowledged by name but that did not compromise the functioning of the team. Indeed, when they separated, it was a statement about the team as well as about the individual player. See, each seemed to say, this is what it takes to make this beautiful music together. They demonstrated to the crowd both the I in the we, and the we in the I. This is, of course, typical of the jazz mode. Even when a band or group has a star, that star always stands back and lets the other back up players have their moment in the spotlight. Those individual moments do not detract from the star’s power or authority. Indeed, the star shines even more luminously because he or she was able to assemble such talented musicians and help them all play both together and apart. Ella FitzGerald was never diminished by standing back and letting the drummer or trumpeter play, nor was Miles Davis or any other jazz great. We may not remember the names of those people who had a chance to briefly take center stage, but they knew they were being recognized and I am sure they felt proud of their accomplishments and gratified that they were acknowledged.

We also see demonstrations of this kind of team power and team intelligence in other settings. When a movie is over, the names of all of those who performed and made the film possible are displayed on the screen. Some movie goers leave before they ever get to see who was best boy or did the casting or fed the crew. But those who stay are made to understand that this was no solo performance and that no matter how much wattage the star has, they are bolstered by a supporting cast who all have names and roles.

In Santiago, Chile several years ago I was privileged to attend the opening of the Salvador Allende Museum — a museum to which many Chilean artists from all over the world donated paintings. Every important politician and cultural figure in Chile was in attendance as were ambassadors from different countries. During the opening ceremony, a lot of people spoke and were honored for their donations and contributions to the museum. Most of the speakers were of course pretty heavy hitters. But the amazing thing was that at the ceremony, the workers who had renovated the building that housed the collection were also asked to come up and take a bow and say a few words. Thus there was the head carpenter, painter, iron worker etc. It was truly moving.

So what about health care. Why can’t the same willingness to acknowledge and be acknowledged take place there.  Would the star surgeon be diminished by acknowledging the nurses or other members of the team? Would that great oncologist’s reputation lose its luster, if he or she admitted that the patient couldn’t have gone into remission had a whole host of people not made recovery possible? Why can’t we do in health care, what they do in the movies? Instead, what we get is star power with no acknowledgment of the supporting cast. Or we get even worse —  signs saying “There is no I in the word team,” at the nurses’ station. Or we get nurses who won’t even tell patients and doctors their full names. As to other “lower level” employees, well they are never acknowledged and utterly invisible.

Next time you go to a movie or a jazz or rock concert look around. There are models of team work and team intelligence out there. And they are ready to import into health care, if people would only take the time to try.