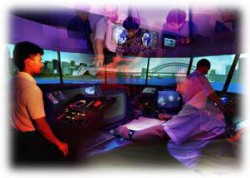 Several weeks ago, I was sitting in a local Starbucks.  At a table nearby, an older man was talking animatedly with a younger one.  An inveterate eavesdropper, I couldn’t stop myself from listening in.  Both men, it quickly became clear, were in the maritime industry — captains on some sort of ship.  What intrigued me was that the older one, who was mentoring or coaching the younger, was using all the lingo of the aviation safety model Crew Resource Management (CRM) that I have written about  with my co-authors in Beyond the Checklist: What Else Health Care Can Learn from Aviation Teamwork and Safety.

I overheard phrases like, “you never want to make decisions by yourself.  You always want to use all your available resources and information.”  Or, “Well, you might want to call and find out what they think.”  Teamwork was the subject of this conversation and the person I was sure was a veteran  captain was coaching the younger one about  how to work on a team.  When the two men finished their conversation and the younger one left, I approached the older man and asked him if he was in the maritime industry.  Yes, he replied, I’ve been a San Francisco Bay Pilot for over 30 years.  I told the captain about my work on aviation and healthcare and patient safety and we agreed to meet for a coffee sometime soon.

About a week later, we met again and talked a lot about teamwork and safety and what is known in the maritime industry as Bridge Team Resource Management.  Just as in the aviation industry, those concerned with safety in the maritime industry learned that technical proficiency in a variety of tasks isn’t enough.  Accidents occur because of poor teamwork and communication and because captains don’t know how to leader in a way that allows people to question their decisions or point out safety hazards.  Now there is systematic team training for those who work in commercial shipping of all kinds — whether on the tankers that bring 90percent of our goods to us, or on Cruise ships that carry passengers all across the globe.  It appears that aviation team training may be somewhat ahead of that in the maritime industry.  Nonetheless, captains and crew members are taught how to function on teams, which has made the industry safer.

The Captain I spoke with told me some interesting things about what he has learned about being a team leader and how he now leads maritime teams.  The most interesting thing he told me underscores one of the non-negotiables of genuine team leadership.  Real leaders never  use their status and authority as a shield that repels input from so-called subordinates.  Quite the opposite.  The job of the mature leader — as true leadership is called in the aviation industry — is to make sure subordinates are comfortable cross-monitoring each other and the chief.  This particular captain explained this in no uncertain terms.  He told me that because he is one of the most senior pilots on the Bay, he knows that his reputation proceeds him.  To assure pyschological safety, he thus deliberately tells all the crew on the bridge that he wants to be cross-monitored and wants them to tell him if they see anything that makes them concerned or uncomfortable.   He expresses this in no uncertain terms.

When this captain talked to me about how he introduces himself when he takes over control of a ship he is bringing into San Francisco Bay, I could only think about a recent safety meeting I’d observed in healthcare.  A surgeon who works as a safety expert was addressing a group of other physicians on patient safety.  He asked the surgeons in the group if they made sure to be on a first name basis with everyone in their ORs.  This flattening of the hierarchy is critical to patient safety since it’s a lot easier to tell Joe he’s about to cut off the wrong leg than Dr. God.  The surgeons in the room responded to this suggestion with barely contained fury. “Our patients want us to be Dr….X,Y,Z,” they insisted.  “Patients don’t want ‘Bob’ to operate on them,” one physician recently told me. ‘They want to be operated on by ‘Dr. Smith.’  When the surgeon asked them how they knew this, was their a study documenting that patients — even at the risk of their own safety — prefer their surgeons to use Dr. X,Y,Z, rather than Joe, they, of course, could site none.  They just knew, that’s all, which seemed to be enough. In fact, this belief is completely contradicted by other studies, which show that patients want to be involved in their care but are discouraged from so-doing by messages subtly — or not so subtly — delivered by doctors and nurses.   As patient safety physician Michael Leonard told me,”I have never met a patient who would object to staff being on first name basis with a physician once the safety implications of this practice were explained.”

I will be writing more about Bridge Team Resource Management in the future.  What is clear to me, however, is that many safety sensitive industries have embraced some form of Team Resource Management training that teaches those who used to flaunt their status to recognize that working in a toxically hierarchical environment can discourage team members from speaking up.  Physicians — and hospital leadership — are way behind the times in this regard.  They have been socialized to allow status to trump safety and they are continuing to socialize new cohorts of physicians and patients into this model.  Things are beginning to change, of course, but not quickly enough.  I hope this New Year will bring more discussion on this topic.