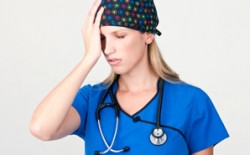 I’ve been thinking a lot lately about punitive cultures in healthcare.  It seems that the mantra of both nursing and medicine is that “nurses eat their young,” and that “doctors eat their young.”  Don’t know about pharmacy, PT, OT and others, but it seems that no one is eating lunch but they everyone is nonetheless stuffed because of this professional canabalism.  Well, we know that hungry people are also irritable and unpleasant and we also know that feasting on one’s professional young is neither a recipe for professional satisfaction nor for high quality performance.

I am less familiar with the ways in which medicine eats its young, but I know for a fact that continued professional feasting on the younger generation is alive and well in nursing.  One of the things that most impressed — or rather depressed — me when I first began writing about nursing was how punitive the culture was.  I was surprised to see how nurses — particularly nursing leaders and academics — treated not only the younger members of the profession but anyone who had the temerity to critique an institutional or individual position or to disagree with institutional policies and procedures.  As I began to write more and more about nursing and attend more and more nursing meetings, I almost felt that people began to treat me like a member of the profession and I soon became part of the daily meal.

I remember speaking at a nursing conference when President Clinton and his wife introduced their health plan.  This particular state nursing association had announced that it was giving its unconditional support to the plan.  I had been asked to give a lecture and when I respectfully — and very gently believe me — questioned the organization'”unconditional” support for the President’s plan (it is a very poor negotiating position, particularly for RNs, to unconditionally support any plan of almost any politician) I was shocked to find that the group’s President would literally not say hello to me as she passed me in the hotel hallway.  In other words, an invited guest  was shunned because she questioned the wisdom of a particular organizational position.

I learned the hard way that in nursing, as in the Amish community, shunning is all too common.  I  was once asked to write a review of a book written by a nurse historian for a major American newspaper.  I didn’t much like the book and debated whether to be kinder to the author because she was a nurse than I would have been if the writer had been, say a doctor, or journalist.  No, I thought, to do that would be a kind of reverse nursism — not taking someone seriously intellectually because she was a nurse.  So I critiqued the book — strongly but by no means viciously.  At another conference I attended, the Dean of the historian’s school of nursing,  a woman who had been friendly to me in the past, quite literally, refused to acknowledge my presence.  Wow, I thought, this is pretty amazing, something I had never experienced in any other occupational or academic discipline.   I seemed into  the convent, and discovered that people were summarily excommunicated if they disagreed with the dogma.  At that conference, I talked with a friend of mine, another dean at another university, and suggested she talk to the dean who shunned me, asking if it was really worth it to her to “burn” the only journalist in the country who, at that time at least, routinely covered nursing.  My friend talked to her and the shunning dean reluctantly acknowledged my existence.

I keep thinking of these incidents when I ponder the complicated relationship nurses have to patient safety and patient advocacy.  On the one hand nurses are definitely a critical part of the patient safety net.  On the other hand, nurses at all levels constantly describe the fact that their socialization into a punitive culture makes them fear speaking out.  Many RNs in critical safety positions relate that they feel unsupported by their nursing hierarchy when it comes to challenging a physician or institutional policies that relate to patient safety.  Nursing students report that they feel fearful and uncomfortable challenging their professors and that their clinical instructors often respond defensibly to being questioned.  “Who are you, you young whipper snapper,”seems to be a common response.

At a recent patient safety conference, I attended a seminar on Just Culture given by a group  of physicians and nurses at Montefiore Medical Center.  The clinical team described their efforts to transform their hospital environment so that people would not be punished if they admitted or reported an honest mistake.  The team had developed a tool to help judge if a mistake was an honest one or due to reckless behavior that did indeed warrant disciplinary action.  The team presented two cases of mistakes made by RNs and asked those attending to discuss them with those seated at their tables.  It was clear that the two examples were honest mistakes that anyone in a similar situation would have made.  Clear at least, to me and another woman — an RN — sitting at our table.  It was fascinating to watch the six other women — all patient safety officers in their institutions, and all nurses — discuss the cases.  You could almost palpably feel their desire to get out the baseball bats and let the nurses who made the mistakes take their blows.  There was no excuse that they would accept to let the nurses presented in the case studies off the hook.  “How could they be so stupid?”one RN asked.  “How could she not know the proper dose of that drug,” another chimed in. “Sure she just got out of nursing school, but still, that’s no excuse.”  I marveled, as did the other RN at the table, at the angry, judgmental tone with which these people who were responsible for patient safety approached the issue of error.  They simply could not overcome their animus at anyone who made a mistake.

This punitive culture needs to be addressed and soon.  Nurses will never be able to play a leading role in patient safety if they do not support each other, do not help each other to admit to and learn from mistakes, and do not create a culture in which everyone nourishes the next generation as well as each other.