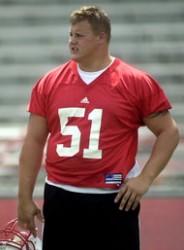 Blame Richie Incognito.  In fact fire him.  Blame his coach.  Fire him too.  Then move on to the folks in Nebraska, the All –Big 12 Conference, the Rams.  Blame them all.  But if you do then you’ve missed the entire point.  When it comes to bullies and bullying, it’s never just the bully and the team (school, company…) leaders that are the real enablers.  It’s all those spectators who stand by and watch the fights, the whispered innuendos, the sneering looks, the jeers and sarcastic comments – or now in the world of the internet – who log on to the stalking emails, Facebook postings, or Youtube videos – and do anything to intervene.

The people who stand by and do nothing – they’re the real problem when it comes to bullying.  It’s like Edmund Burke supposedly said in 1777, “The only thing necessary for the triumph of evil is that good men do nothing.”  (Today, finally recognize that women of good will can be equally guilty).

I wasn’t in the locker room with Richie Incognito and his teammates, nor was I present when he himself was bullied as a Little Leaguer, but I can tell you that his story begins when his own Little League teammates were allowed to bully him and no one did anything to protect him (except his father, who of course, seems to have set his son on the path from victim to victimizer).

There’s usually only a few paths available to someone who’s been bullied and most of those end in the same place.  You become a bully yourself, like Richie did. You check out (like all those poor victims of internet bullying found dangling in their bedrooms). Or you soldier – always a little terrified of all those people who might turn around and begin bullying you again.

I should know. I spent my entire childhood being bullied.  Back in the Fifties, however, they didn’t call it bullying. I was “picked on” because I was “so sensitive.”  As for the bullies, they got off scot free because people like me were considered to be “super sensitive.” Whatever the era or the attitude, bullying leaves scars that never entirely heal.  (I just turned 68 and sometimes I find myself anxious in situations which you wouldn’t think particularly nervous making).  Which is why we have to stop blaming the bully and start paying attention to the legion of the bully enablers.

In my case, it wasn’t only the principle of my elementary school who allowed a clique of unhappy girls to stand in a circle and hit me at recess the first day of every new school year.  It wasn’t the leader of that clique of about 15 miserable kids who initiated the bullying in the first place. It wasn’t the two mean kids I bunked with in summer camp when I was 11.  The people who make bullying possible were those the parents of the kids who allowed their children to be bullies; the teachers or camp staff who didn’t lay down the law about acceptable behavior; and a culture that accepted the cliquish behavior of mean boys and girls.

In Richie Incognito’s case I assume it was the Little League parents who cheered their kids on because the winning was everything.  It was certainly the father who told young Richie to hit back.  Finally, football itself may be to blame. After all, how many concussions did little Richie sustain before he became big Richie and demonstrated such a clear inability to control his anger.  Difficult to control aggression, is after all, one of the classic symptoms of Traumatic Brain Injury.  If that’s true, it will take more than one anger management stint at Menninger’s to deal with Incognito’s rage.

When we consider the problem of bullying – particularly among celebrity bullies like Incognito – we also have to target the media enablers who – perhaps inadvertently –make bullying acceptable.  Sports figures are excused when they win.  Kitchen gods like Gordon Ramsey are actually paid to bully people on TV.  When celebrity chefs like Charlie Trotter die, their obituaries uncritically report their appalling behavior.  Trotter, it seems, once told an underling he’d “kill” his whole family if he messed up a dish (is any meal worth humiliating someone who’s powerless). Famous surgeons are excused when they yell and throw things in the OR because they’re supposedly under so much stress.

When is a culture that celebrates aggression going to insist that each and everyone of us who stands by and does nothing is as guilty of bullying as the person out of whose mouth the jeers emerge?