Film The Hungry Heart Must See for Anyone In Primary Care 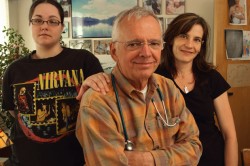 The picture at the right is of pediatrician Fred Holmes who has just retired from practice in St. Albans, Vermont.  Holmes is the focus of Bess O’Brien’s newly released film The Hungry Heart, a documentary about prescription drug abuse among young people in Vermont.  This is a riveting film about a major national epidemic.  I saw the premiere in Burlington on Friday night.  It was attended by over 1000 people, 400 of whom were in recovery. The  movie is touring all over Vermont and is particularly useful in raising the issue of Rx drug abuse and the need for many more treatment programs and resources devoted to this and other mental health issues.  But what impressed me most about the film was the behavior modeled by Holmes.  This film should be used as a teaching tool in every health professional school in North America.  Really!!!

Holmes is no touchy feely patsy, or marshmellow fluff doc in a box.  While he is deeply compassionate, he is also imminently practical.  He sets boundaries but they are not the rigid, “DO NOT CROSS THIS LINE” standard that Dr. Gordon Schiff critiques  so eloquently in his recent article in JAMA.  Holmes understands his young patients have a terrible, unrelenting disease.  He is always supportive and never blames them when they relapse.  On the other hand, he makes it clear to them that certain conduct cannot be tolerated and that he cannot keep treating them if they engage in certain kinds of behaviors.  This is always stated matter-of-factly.  Never does he condemn or judge.  He always encourages his patients and reinforces the positive.  But he also maintains his ethical standards — for example, reporting a case of child abuse when it occurs.  The compassion and practical, supportive approach that he embodies is not only important for those treating substance abuse but for all those clinicians who are dealing with people who have difficult to manage chronic diseases that are related to health habits and difficult to change behaviors (which seem today to be legion).

You really have to see Holmes on film to see the example he sets.  I recommend that nursing, medical, pharmacy, social work and other programs show this film to their students and use it as a teaching tool.