New Review of Beyond the Checklist

Thought people would like to see this review that appeared on Amazon. 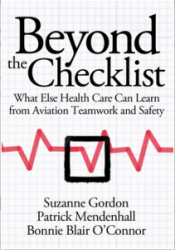 By R. M. Ostenson
Format:Paperback|Amazon Verified Purchase
I have survived in flying a private plane for many decades… Found out (from this book) a lot about how I can improve my odds of lasting many more decades. I knew commercial pilots years ago who hated the changes that were happening in the airlines with CRM who were like me (old style seat-of-the-pants pilots) and only trusted themselves.They did not want to listen to input from others when decisions were to be made in the plane. They were THE CAPTAIN!

Those of us who survived being “Lone Rangers” of those years got ourselves in and out of trouble several times because we knew we had to do things on our own (macho). If we knew then what we know now, several pilots from years past would still be here instead of augered into terra firma.

This approach is needed in health care because I know nurses who’ve witnessed many critical errors in surgery, and in prescribing, that could have been avoided if they were allowed to suggest anything to the white coated autocrat. But, sadly, the heirarchy did not allow them to speak up for fear of losing their jobs.

Egos have taken many lives, and it is time for that to end. Gary Null researched the safety of medical care, and wrote “Death By Medicine”. He reported that medical care kills almost a million people per year and is the leading cause of death in this country. Many physicians need to become accountable instead of relying on pharmaceutical reps, hospital management, etc. to tell them what to do (and protect them if they make a mistake). An attorney I know will not even do medical malpractice cases because he said “Good luck in getting an MD to testify against another MD.” It is not a “transparent” group or organization.

The “standard of care” in medicine is not what should be done in so many cases! You and I have heard the stories of death and debilitation because of errors we knew were done… It is time for many doctors to refer out for other opinions with different providers, and get feedback from professionals outside their tight knit little cliques. They are dealing with people’s lives, hopes, dreams, families, and friends, not just a “patient”.

So many doctors really care about what happens to their patients, but are shackled by the system that feeds them. Time to get back to good doctoring instead of tight business procedures. It’s time for them to care enough to stand their ground and become the great doctors they can be, instead of being pawns of drug companies, management, insurance companies, and other people/things that keep them from being exemplary in their work.

Up to 440,000 Patients May Die Each Year in USUncategorized
Toxic Hierarchy and Patient SafetyHealth Care, Uncategorized