Check out this article.  Please!!! It’s from Propublica and is entitled “ How Many Die from Medical Mistakes in U.S. Hospitals?” by Marshall Allen. 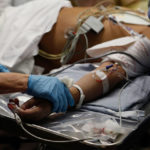 What Allen tells us is that way more people are dying from medical mistakes that we thought.  The 1999 IOM report To Err is Human estimated there were 98,000 deaths a year from preventable medical errors.  In 2010, another study by the Department of Health and Human Services (DSS) estimated that 180,000 Medicare enrollees were dying from medical mistakes. That was only Medicare recipients mind you.  Now we have another study that tells us the number of preventable deaths may be even higher than 180,000.  So between 1999 and 2013, we have made only statistical progress in registering how many more deaths we have than we estimated fourteen years ago.

The fact that so many people are dying in US hospitals comes as no surprise to me.  As I travel from state to state and hospital to hospital, I hear some great stories and some really terrifying ones. Sometimes I think it’s a miracle that more people aren’t dying and being injured. I have written about a number of the latter problems on my blog.  Safety models like those developed in aviation are not being utilized nearly enough. Not enough people are working on  genuine teams and get little to no team training.  When hospitals do take advantage of excellent programs like TeamSTEPPS, the training may be a one time only event and not recurrent, or implemented in a way that does not integrate team lessons into actual practice.  Doctors are still reaming out, blowing off, or otherwise discouraging nurses who try to point out patient safety errors.  I have gone to many patient safety meetings over the past  years, and few physicians are present, with nurses making up most of the audience. But RNs may also be as much part of the problem as the solution.  Many RNs are in a discipline and punish mode.  Nurses don’t listen to aides and do not include those lower on the health care ladder — those referred to as “nurse extenders” (like MDs refer to RNs as “physician extenders”) on what passes for a team.

Then there is fatigue and workload. Everyone who works in healthcare seems to be exhausted most of the time.  This is not true only of physicians-in-training, whose work week has not been reduced far enough.  Nurses are working 12- plus hour days. Physicians who are in practice, not training, are working 15- hour days or more.  NPs in a hospital which I recently visited were workig  15 to 16 hour shifts routinely. Only one state, California has any nurse staffing ratios.  And there are no regulations about the number of patients physicians can see in a day. Ditto for the workload of others in healthcare.

Or what about accessories.  As Michael Gardam and I have written in our Boston Globe article “Medical Staff Need to Lose Their Ties and Rings,” walk down the corridors of US hospitals and ties wave in the breeze even though we know that they are carriers of bacteria.  Nurses, doctors and other staff where rings, watches and bracelets when god knows what kind of bacteria is lurking beneath.  In many hospitals there may not be unambiguous protocols for making sure reusable medical equipment really isn’t being reused.  (See post “Is It Dirty or Is It Clean?)As for reporting systems, hospital management seems to either seesaw between tolerating reckless, dangerous practitioners (or as in the cases of Charles Cullen and Jayent Patel passing them on to other institutions) or to continue disciplining staff who make mistakes that were not due to recklessness at all.  Some are even firing staff for such mistakes.  In some cases, like Julie Thao in Wisconsin, some have been charged with a felony for an inadvertent error. In Texas RNs who tried to report serious medical mistakeswere charged with a felony for their patient advocacy. To state what should be obvious, this does not serve the cause of patient safety.

These are only some of the Swiss Cheese layers that have not been systematically addressed and that contribute to patient deaths and injuries. In my experience hospitals and other health care institutions race around dealing with one layer in the Swiss Cheese  and then another, implementing one flavor of the month initiative after another, without making sure anything is permanently fixed and without constantly revisiting patient safety issues.  Until these and many more layers are systematically dealt with, patients will continue dying and being injured.

New Book in Our Series on HealthcareUncategorized
New Review of Beyond the ChecklistHealth Care, Uncategorized